Home What We’re Listening To Ventures With Vodka

If you’re a naïve American like I am, you probably imagine that Ireland has enough libations of various ilk to keep its nation of pub and club goers happily langered. Ales and bitters, whiskeys and stouts, the isle’s simple but satisfying drinking traditions have been keeping folks happy since long before the bleak and marshy days of the Druids. With a pub (or three) on every corner and a national treasure like Guinness to warm them through the lashing-down rain, the Irish have no need to develop new tastes in alcohol. They achieved the heights of the drinking experience a few centuries back and summed it up in five words: Guinness is good for you. They can’t be bothered to experiment further. Or at least that used to be the case, until some innovative lad or lassie got restless at the local one night and came up with some funny ideas about vodka.It started with Red Bull, an Austrian “energy drink” described by its makers as “a utility drink to be taken against physical weariness or exhaustion.” The concoction, inspired by a type of syrup Asian businessmen drink to stay awake and concentrated during marathon work days, combines two metabolic transmitters with caffeine, vitamins and carbohydrates. Red Bull has gained popularity with extreme athletes as well as droves of amateur footballers in Ireland, who slug down cans before practices and matches. The brew has become such a fixture of sporting events, especially those that require superhuman endurance, that Red Bull has settled in as corporate sponsor of many extreme events in the United States and abroad.

Though it’s been associated with everything from colas to isotonic drinks, Red Bull falls into neither of these categories. 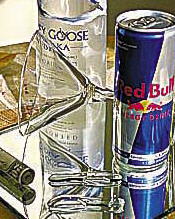 According to makers and devotees of the drink, what sets Red Bull apart is its high efficacy against both mental and physical weariness and exhaustion. In tests done on the drink in 1980, athletes who drank Red Bull increased their endurance by 25 percent and required a shorter period of regeneration. Word spread across Europe and Asia, and other companies began making similar energy drinks to throw onto the playing field. At present, there are over 50 such brews available worldwide, including Flying Horse, Flash Power, Lola Blue, XTC, Virgin Energy and Xplosiv. As the sexy names suggest, the drinks are no longer relegated to the rough-and-tumble sports scene: after all, if they can let you cycle, row, ski, skate and windsurf longer, they can let you party longer, too.A faster-acting version of the “smart drinks” that kept all-night partiers going at the height of the rave scene, Red Bull improves concentration and reactions, stimulates circulation and the nervous system and increases stamina. While it’s a worthwhile party drink for these benefits alone, some sharp tack hit on the idea that it might do well as a mixer, especially for extended nights of clubbing when one wants to get by on substances of the legal persuasion. The theory held that, in addition to getting one bollixed more quickly by pumping up the circulatory system, the stimulant energy drink would counteract the depressive effects of alcohol that can cut a perfectly good evening short as the body cries uncle. Indeed, vodka mixed with the light, curiously fruity Red Bull packs quite the inebriating punch, and the new drink trend has Irish youth trading in their pint glasses for a whole new generation of hangover.

Though the fast, crisp high of a couple “vodka Red Bulls” can keep the average drinker happy for the night, there are always some renegades (or psychopaths) who continue the quest for the most intense drinking experience available. It seems to have arrived in the trend of vodka snorting, which is hitting Irish clubs via London. Where once upon a time only snuff and Bolivian Marching Powder dared to tread, pure vodka is now plumbing the nasal passages of those eager to discover the next and best legal buzz. Since thin nasal membranes are excellent sponges for alcohol absorption, snorting vodka gives those who indulge a rapid, popper-like hit. Vodka snorters inhale the liquid either by using a straw in a glass or making a fist and pouring vodka into the well between thumb and forefinger, then blocking one nasal passage while snorting strongly through the other (picture a Cossack Scarface). Nutty test candidates with no regard for their personal safety report that, after burning the hell out of the delicate nasal passages and backs of the eyes, the vodka provides a little five-second head rush. If this is what drinking has come to, gulping Guinness over a lifetime must be more boring than I thought.

But there has to be more than ennui behind this sudden urge to find new and exciting ways to consume vodka. Much of the experimental drive probably lies in the fact that a large proportion of the Irish demographic is under age 30. Most don’t want to spend a lethargic evening sitting around the local, getting bloated on upwards of six pints in exchange for a short-lived buzz and a brutal hangover. They want their altered states of consciousness fast and furious, preferably served up in forms that won’t ruin their chances of dancing through the night.

Vodka, it seems, it just the thing to make partying dreams come true. Use a brand like the British Rocket Fuel Vodka, which has been painstakingly distilled a “higher, more traditional strength of 47.5% alcohol by volume,” and the likelihood of jetting to inebriation before reaching the bottom of the glass is increased proportionately. For those too conservative to go the Red Bull or snorting routes, mixing Rocket Fuel into one of the company’s trademark cocktails, like “Space Cadet” (vodka, Coke, o.j. and ice) or “Lunar Lander” (vodka, cranberry and orange juices and ice), can still shoot sobriety into the nether regions of the galaxy.

While Americans remain more or less in the nineties when it comes to vodka, happily mixing good old Stoli and Absolut into Cosmopolitans and Jell-O shots, we’re next in line for the “smart” vodka trends of the millenium. With Red Bull now available in 20 countries, including California, it shouldn’t be long before “vodka Red Bull” migrates to a bar near you. Give the concoction a try before it becomes a target of Puritan ethics and goes the way of herbal ecstasy, another natural but drug-like substance that made users feel too good for some people’s comfort.

As for the snorting business, I doubt the United States will ever see clubbers huddled in toilet stalls around a glass of vodka. In general, we’re a nation that prefers to avoid physical suffering when it comes to intoxication, or at least delay for a good 12 hours. Then again, who knows? If vodka can sway the Irish, whose drinking habits are older than time, Americans may very well grab straws as soon as the nasal idiocy clears customs.
Should you choose to experiment with vodka, consider the inspirational insights of two nations that hold the spirit in high esteem: the Russians, who remind us that those who never risk, never get to drink champagne, and the Irish, who insist that an Irishman is never drunk so long as he can hold onto a blade of grass and not fall off the world. I myself would encourage you to treat your nose with kindness and remember the words of Red Bull manufacturers: “It is not the non-alcoholic part, but the alcoholic part of a drink that should be taken with caution. This has been scientifically proven and confirmed by the Austrian Ministry of Health.”

The Segregation of Wine
1,430 views

Clean Wine: Why Cameron Diaz is Fine, and Why Your Anger is Misplaced
1,410 views