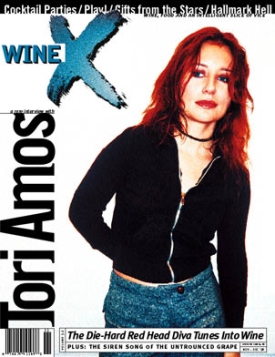 A True Redhead
A delicate but very grounded Tori Amos sits curled up in front of me on her dressing room sofa. In less than two hours she’ll be performing for 3,000 fanatical fans in San Diego. But at this very moment she’s looking decidedly un-rock-star like in a pair of faded jeans and no makeup. Inside the cocoon-like room is an aura of calm. A portable Japanese fountain gurgles in one corner and rice-paper parasols and candles diffuse the dormitory-like florescent lighting. Outside is the drone of guitars being tuned and the last minute maneuvering of roadies, venue staff and security guards. Tori has just finished dinner (tom yum, prepared by her traveling chef) and is now sizing up a 1989 Chateaux Haut Brion, one of two bottles I’ve brought to share with her.

Just three days ago, I was drinking a far less noble wine with a wayward musician who frequently crashes at my house — Colin Devlin. Colin is lead singer of The Devlins — the band currently opening Tori’s world tour in support of her fourth album, From The Choir Girl Hotel. That night, in the grapy glow, Colin spun tales of polishing off multiple bottles of Silver Oak cabernet with Tori at the Ritz Carleton in Cleveland. What’s more, he let slip that Tori and her new husband had registered their wedding at a London wine shop, and the back lounge of their tour bus doubles as cellar for dozens of Grand Cru wines. I couldn’t resist. The next day I put Colin to the task of securing me an interview for Wine X. Hey, there’s no such thing as a free couch!

Twenty-four hours later, Colin called from San Jose. Despite Tori’s interview moratorium, she was willing — actually eager — to talk wine. So I cashed in some personal markers for two killer bottles, borrowed a DAT recorder and spun off to San Diego to drink with the diva.

I pour the 1989 Haut Brion, press record and prepare to ask my first question. But Tori’s already one step ahead

Tori Amos: I’ll tell you how it all happened. Al Stewart (“The Year of the Cat”) asked me to write something for him. The first song I came up with was something that ended up being “Silent All These Years.” Obviously, I didn’t give it to him. But I did give him something else, and we got on really well. One night he took me, my producer and his girlfriend out to dinner with four bottles in tow — a Champagne, a Chablis and two Bordeaux. He said Burgundy’s for sex, Bordeaux for intellect. Then he asked me if I’d ever had good wine. I told him what I drank and he said, “No, you’ve never had good wine.” I mean it wasn’t screwtop, but to him it was absolute crap. We drank all four bottles. I could sit here and drink this whole bottle with you. But I’ve got to play.

Bob Blumer: So that night was your wine epiphany?

T: That night changed my life. I had started out with chardonnay. That’s how I opened up to wine, because it’s like a milkshake without the dairy, if you know what I mean. So that Chablis that Al brought along that night changed my whole view of what a white wine was. And now I’m really getting into Chablis. I think when Al exposed me to the French side of things — I mean I was coming from the California side because I lived here — I was just blown away. It was like playing a Bosendorfer piano, which to me is the best piano in the world. I really understood that night — the art form, no different than the art form of music composers. It’s not just about strum-dum-da-dee-dum. I get it wrong a lot, but I have a commitment to the instrument. I have no illusion that I get it right. If I get it right for more than a few minutes every night in a two-hour performance, that’s a really good night. For the most part it’s a commitment to trying to stay skillful and yet surrendering at the same time. You almost have to completely put your technique in the back seat and trust that it’s still there so you can let the music through. And that’s when the alchemy happens. When I’m holding on so tight there’s no sensuality anymore. You just cross your fingers and hope the music’s gonna show up. It’s like making love — you don’t fuck to a metronome. It becomes an internal thing. I think these guys and women who are making wine just cross their fingers sometimes. At a certain point it has to transcend geometry. That’s why I appreciate it so much.

A roar rises from the crowd as The Devlins take the stage.

B: Do you cross your fingers when you’re choosing a wine?

T: It’s instinct more than anything. When I’m in a restaurant I just look at the list, and I get an instinct. People find it really strange — they find it unfair because I don’t deserve to be right because I don’t know what the fuck I’m talking about. It’s like the music — when I’m tracking a song, tracking a tone, a sound, I just surrender. I feel the essence behind what I’m reading on a wine list, and I ask questions.

B: How do you discover new wines?

T: Again, it’s like music. I mean, I’m lucky if I get played on the radio, so with wine, I search out the ones that are not so popular. When a wine steward says to me, “This is really a popular wine,” I start getting the shakes.

T: Yeah. Or like “Number eight on the Billboard charts” — HELP!

B: Do you have a favorite California wine?

T: Silver Oak. The ’92. I really love that. It’s all gone now. I don’t have any more. They tell me to lay it down, but I haven’t gotten that concept yet.

B: What kind of food are you into?

T: Quail eggs and all that shit are not my scene. I’m a southern girl. I don’t need all that. I just love yummy food that isn’t about bells and whistles.

T: I don’t buy flashy cars. I don’t buy watches. I don’t buy jewelry. I’m not into all that. I paid my house off. I did it because I’m so nervous about losing it all. I’ve been working since I was thirteen years old. It’s about balance — it’s being able to spend some and still have some.

B: I have a sense that your receptors are very open to the world around you. Do you think this allows you to be more sensitive to a wine?

T: I hear the wine. It’s like a structure. I see it as a piece. I hear it before I taste it. It’s calling me. And then I start to hear it when I’m tasting it. Not that I put crystal suppositories up my ass… I’m not new age… That’s not my scene. Hearing the wine is really a mathematical thing. I hear the lower end of the wine like the bottom end in the bass. I see it in stages. Like in sheet music, you know, there’s the left hand, there’s what my thumbs are playing, and then there’s what my right hand is playing.

B: How do you see this Haut Brion?

T: I see this wine like a wave… in Hawaii. And as we’re cruising through it, it has a lot of upper mids like the curve right under the crest of the wave. The upper mids is what I call it in music. If I’m telling the engineer to open my upper mids, that’s like B above middle C. The C above middle C, C-D — that range — that’s all working for me in this wine. It’s not high highs like G. Violins would be playing it — it’s too high for a viola. And I don’t get a lot of cello in this wine. But I do get a bit of bass. It’s beautiful. We’re having fun.

B: Do you normally drink wine before you play?

T: I don’t before the live shows because the athletic side of the show is really hard on me. But the truth is I’ve recorded a lot of my work on wine. Recording is different. You do four takes and then you’ve got it.

B: This is supposedly a very collectable wine. What does it do for you?

T: This one’s like the Dallas Cowboy cheerleaders — everybody wants them and they’re a bit airbrushed and everything. I would give it to the band. It’s a bit like a pop hit — there’s no Bartok [an early twentieth century experimental composer] existing in this. Do you mind if I switch back? If I’m going to drink wine before the show, I’d rather drink the first one.

B: Do you ever get intimidated when you’re ordering wine?

T: I was at Charles Boyer’s place near Champagne. And he’s like THE chef in France. He’s got his own place where you can stay and eat. I’m finding that good sommeliers, like the ones at Boyer’s, want to know what you’re instincts are. I’m just some little plebe, you know. I’m a dyed redhead. The grill doesn’t match. I play piano. I’m part Cherokee and part English-Irish. There are certain things that make me just me. It never got me many dates, but these sommeliers are going to extract those things. And they want to know why you’re drawn to this wine. And so I say I feel a dynamic from the people that made this wine. It’s really kind of turbulent. I feel that there’s some kind of unrequited passion. That somebody might have been killed over it. And they look at me like “you’re out of your mind, but let’s go.”

On that note, an hour into my half-hour interview, Tori’s trusted assistant, Tam, walks in and announces that showtime is quickly approaching. Tori hugs me good-bye, and I leave her to begin her metamorphosis into the rock star that’ll appear on stage in twenty minutes.

As I watch from backstage, as she mesmerizes her legions of fans, I can’t help but wonder what she’ll dust off from her rolling wine cellar on the overnight ride to Phoenix. And I can’t help but think how far rock ‘n roll has come since the days of Budweiser and baloney.

Jewel on the Surprising Talent That Made Her a Music Superstar