Home The Taming of the Pét-Nat

The Taming of the Pét-Nat. Be cool. Try it..

I was first introduced to pét-nat in 2016 by a sommelier friend after a brisk surf in Pacifica, a salty little town 20 minutes south of San Francisco on Highway 1. In the water, we thrashed in funk-tainted spume infused with polluted runoff from San Pedro Creek. Thus primed for pét-nat, we picked up a bottle of J.Brix Cobolorum at Table Wine, a Pacifica staple slanging populist beverages in a strip mall just over the highway from the beach. I buried the bottle in a nest of damp wetsuits heaped in the bed of my 91 Toyota Pickup (unencumbered by the excesses of power steering or climate control), and jounced back to the city on shot suspension.

I’ve since been schooled on pét-nat protocol:

2. Submerge bottle in ice bucket for 30 minutes to tame bubbles and gather sediment.

3. Have glass in hand while removing crown cap to receive inevitable cascade of suds.

Later on in my kitchen, where step 1 clouded our judgement in regards to executing step 2 and 3; we pried off the crown cap with a Bic lighter, and a geyser erupted to the ceiling, drenching us both. We mopped up the mess while sipping the murky dregs from mason jars between fits of laughter.

A year later, while working as a server at Nico (a modern 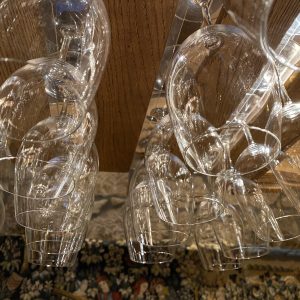 French bistro originally located in Pac Heights and recently reopened in Jackson Square), we frequently poured Bernard Rondeau’s Bugey-Cerdon Méthode Ancestrale by-the-glass. Each time I opened a bottle, an obstinate stream of foam escaped the neck, reminding me of that explosive bottle of Cobolorum. It was the first time I recognized a connection between pét-nat and Méthode Ancestrale, French for Ancestral Method, a style of sparkling wine developed around Limoux in the early 16th century. Indeed, these overlapping styles share a crucial technique conducive to turbulent juice: completion of the initial fermentation in the bottle.

Since pét-nat went mainstream, discussion of the topic has shifted from what it is to what it will become. For some, pét-nat is an ethos–the punk rock of sparkling wine–alluring for its raw, unfiltered image. For them, the essence is in the rebellion against parameters. Efforts have been made to distinguish pét-nat from Méthode Ancestrale based on techniques like disgorgement, temperature control, and even the type of closure, but the reality is that benchmark producers in the Loire Valley, from Domaine Le Brisseau to Les Capriades, implement whatever techniques they feel manifest a more characterful, delicious wine and use the titles interchangeably at whim.

Just as wine has fragmented into disparate markets, so too have the motivations of drinkers.  Perhaps the preoccupation with focusing classifications in order to target imagined audiences is a frankenstein of marketing. If so, is taming pét-nat even important? Will we bludgeon the category to oblivion like “hip”?

More importantly: Is it delicious? And affordable? Does it pair well with friends 🙂
Feb 3, 2020Wine X
A New Level of Wine Branding to Reach A New Type of CustomerHow to Market a New Liquor Brand