Home What We’re Listening To Still Life with Bottle 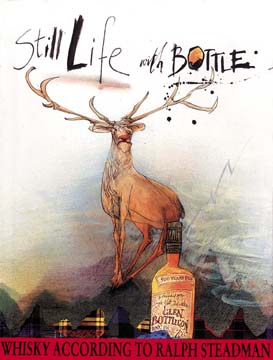 Ralph Steadman — author, illustrator, raconteur and scotch aficionado — is so divinely gifted, you want to wrap your fingers around his scrawny neck and strangle him (if only you’re willing to put down his book for one moment to free up your hands). Steadman is best known for his signature style illustrations that’ve become synonymous with the hen peckings of gonzo journalist Hunter S. Thompson.

Several years ago, in his love-letter book about wine entitled The Grapes of Ralph, Steadman rewrote the bible on writing about wine. In Still Life with a Bottle, he applies all of his vivid imagination and skewed perspective to the murky world of Scottish whisky.

You need read no further than his acknowledgments page to get a taste of Steadman’s brutally irreverent style: “Editors are, in the main, loathsome jelly, slimy moss…” After an (uncharacteristically) slow start through the history of distillation, he hits his stride and takes us on a scotch-fueled odyssey through the highlands and islands of Scotland. Along the way we meet drunken distillers, small time bootleggers, cunning smugglers and flush-cheeked excise officers — all brought to life by Steadman’s incredible knack for visual and verbal caricature.

In spite of his acerbic pen, it’s clear that Steadman has a passion for his subject. He explores every aspect of scotch production and appreciation with the wit and vitality of a true whisky fanatic. “Islay malts are known particularly for their peatiness and a strong salt-sprayed aye, aye cap’n, seaweedy flavor.” It’s enough make you wish he were available to interpret all of the world’s mysteries for you.

Warning: don’t even think of reading this book without a wee dram of the stuff near by.
The following blind tasting was conducted by a panel assembled by Bob Blumer (a.k.a. The Surreal Gourmet). All panel members are artists and devoted single-malt drinkers. When times are good, they drink the best single-malt scotch they can afford. When times are hard, they cancel their cable (that is, if they have TVs), shop at thrift stores, roll their nickels and drink the best single-malt scotch they can’t afford. FYI, tasting took place in Vancouver, Canada.Glenfidich “Special Reserve” (no age given)
Save it for the next time you’re stranded in an ice fishing shack with nothing else to keep you warm.

Bowmore Islay 12 year
Starts with a sharp smoky taste, then proceeds to set off the smoke alarms.

Balvenie Doublewood 12 year
Like maple syrup. Rich and intoxicating. An excellent way to introduce yourself to single malts.

Cragganmore 12 years
Soft, rich and well-balanced, with notes of vanilla. Very smooth all the way down the pipes. More please.

Oban 14 year
Bottled love — everything you want a single malt-scotch to be: a bit of smoke, a bit of peat and a bit of the sea.

Dalwhinnie 15 year
The sweet smokiness of this one coats your mouth and puts a candy lip smile on your face.

Lagavulin Islay 16 years
Heaps of peat, fertile summer rain, wind and salt seas. Like oral sex, it’s a bit of an acquired taste, but once you get used to it, it’s hard to believe you didn’t always think it was the best thing in the world.

Highland Park 25 year
Big, deep and complex. Like its old age, it’s secure in its identity.

Aberlour 10 year
Wise beyond its years. Surprising smoothness for such a youngster