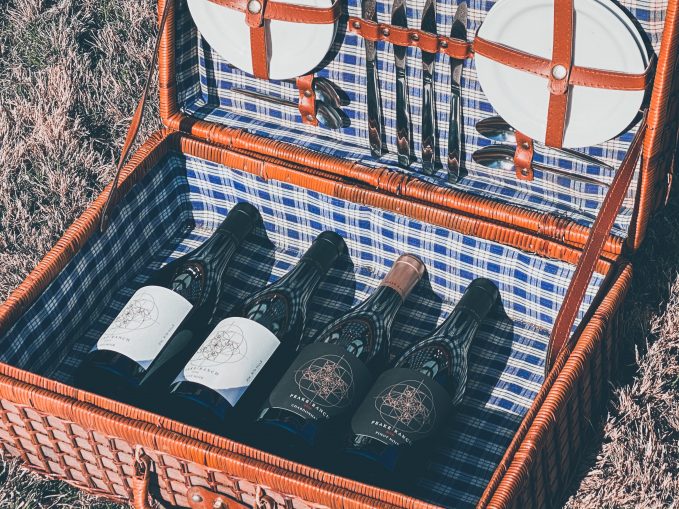 We got a cool heads up from our friend Adam Lee of Clarice that we ought to check out what was going on with Peake Ranch. We had a few bottles in hand already, but it was nice to get a little heads up about the juice spilling into our glass before we sipped it.

Fair warning, I’m a sucker for a good, authentic story, and for do-gooders too. Shrug, what can I say? Its how I’m wired. Fortunately for me that the wine world has a lot of both, but sometimes you gotta get a good tip to know where to look and who to ask. 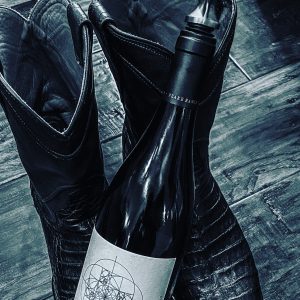 So here’s the setup. Peake is owned by John & Gill Wanger, a Los Angeles power couple with down-home roots in west coast agriculture. I can say power couple, but that would probably make them blush. They’ve had well-deserved, well-earned success in their careers and have used the opportunities presented to them to continue (perhaps fortify is a better word) their passions: Wine & Philanthropy.

John grew up working in his parent’s lemon and avocado orchards in Ventura county. That connection to land and purpose never really got out of his blood, and turned into a love of wine as an adult. John studied physics and UCLA and founded Camden Asset Managed. With that in mind, it should be no surprise that John dug deep into the hows, whats, and how-to’s of California wine, even going so far as earning a winemaking certificate from UC Davis. And when they could, he & Gill deliberately moved into the wine business in 2003 as vineyard overs in Santa Barbara County,.

For many years, Gill has been deeply involved in many charities and causes, many of those focused on elevating issues and needs of Californians, some causes more global in nature. Gill would admit that she’s no less of a wine lover that John. But for Gill, the excitement was less about a return to roots as much as it was an opportunity to speak to people’s hearts and minds while tantalizing their palate. A platform.

John and Gill added to their vineyard holdings when they purchased half of the John Sebastiano Vineyard in the Sta. Rita Hills & then later picked up the 50 acre Peak Ranch. So, check this out, Peake Ranch has a little history that shouldn’t fly under your radar. Sideways.. Yeah, you know what I’m talking about.. THAT Sideways… The Sanford tasting Room, where Miles tries passionately to teach Jack the deductive tasting process, is right there on the property at Peake…. I’m as serious as Miles.

Early reviews of the Peake Ranch Pinots and Chards are pretty much over the top. Check. But we were blown away by something we didn’t totally expect….. They make Bellis Noir, a Rhône blend, that is just delicious….. See our X Rated review. Peake’s future with these varietals is definitely something we are going to keep our eye on. No doubt in my mind that Sta Rita Hills is going to continue to make pinots that will prompt instant feelings of jealousy, wishing some was in our glass…. but the amazing expression that Peake is getting out of their Syrah and Grenache is worth your attention. Just Saying.

And when we poured out the 2017 Bellis Noir, we saw a logo on the back label that says “We 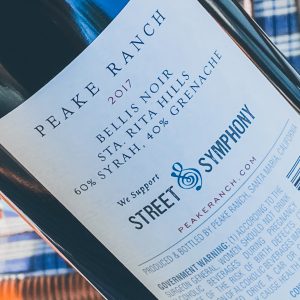 support Street Symphony” and we quickly recalled something Adam told us. John and Gill wanted to marry their commitment to great causes into their wine efforts. Truly using their platform, their bottles, and their own community outreach to give some viral momentum to causes that they’ve been touched by. Street Symphony http://streetsymphony.org/ is an LA-based group that is using the arts to impact those that have fallen on tough times. Very cool

So its a good story + doing good. One of the cool things about that formula is that when I’ve been able to check those two boxes, the wines have NEVER disappointed. That’s the case for our first tasting of Peake Ranch. I bet there’s more of that to come…..