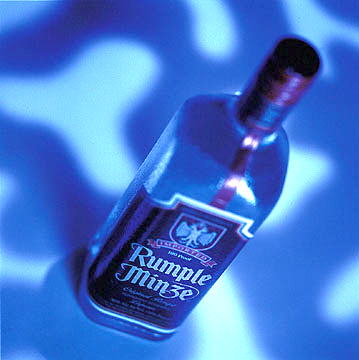 Those wonderful folks who brought us WW I and its blockbuster sequel have also given us many of our favorite drinks, including some of the finest beers on the planet, along with a wide array of liqueurs and schnapps. The kingpin of German schnapps is Rumpleminze, a popular peppermint concoction that’s generally dished out in a chilled shot glass.

In Germany, drinking protocol generally mandates (we hesitate to say “dictates”) that schnapps is served as an after-dinner drink — a leisurely post-prandial digestive. Americans, however, have never quite adopted the German habits of starting major international conflicts for world hegemony or sipping schnapps casually after a meal. From chilled shot glasses, schnapps is most often tossed back by younger drinkers, who get a quick blast of Rumple’s 100 proof peppermint-blitzkrieg which is just as refreshing on the breath as mouthwash — and much more intoxicating. Since the word schnapps is actually derived from the German word for “gulp” or “mouthful,” this may actually be a more appropriate way to consume it.

In its most typical incantation, schnapps is the generic term for a clear brandy distilled from fermented fruit, like peach, apple or pear. But a peppermint schnapps is really an herbal liqueur dominated, of course, by peppermint, with natural peppermint flavorings and added sugar.

Most liqueurs date back many centuries to when they were ostensibly consumed for their curative, medicinal qualities. Today, you don’t need to delude yourself so. People drink liqueurs because they taste good, they go down easy and they’re a little splash of something different. In the 1980s, liqueurs, shooters and various schnapps flavors came into their own, and an eclectic variety was stacked upon most bar shelves. And if you stack it on your bar shelf, they will drink it. Particularly if it’s tasty and backed up by a multi-million dollar advertising budget. Rumple is both.

A new, rather unexplored market segment, such as schnapps shooters, relies heavily on successful marketing. Rumple has been very aggressive at appealing to younger drinkers by using hot-looking Teutonic women astride a polar bear (which naturally made young male bar patrons very thirsty and some lucky polar bears very happy). Today, Rumple is firmly entrenched as one of the hottest and most popular brands in the shooters market, and you’re likely to spy the clear liqueur with the black label at your local watering hole.

For all its 100-proof strength, Rumple actually goes down remarkably smoothly, and its bracing minty freshness really does make you feel as if you’ve just brushed your teeth. It may actually inspire confidence when you feel brazen (or drunk) enough to approach that certain someone across the bar. So if you’re seeking a cool shooter to make your night a bit hotter, Rumple is a good, user-friendly introductory tipple to toss back.

Even though the Cold War is over, it can be very fulfilling to spy on a German. When the opportunity arises, think of investigating Rumple as your civic duty. You owe it to your country.

DEAD NAZI
Chilled Rumple and Jager in a shot glass