Home Put A Cork In It!

Put A Cork In It!

The tradition of putting a piece of tree bark in wine. Who the hell thought of this? And why, given the technological advances in beverage closures, is cork still used? Well, let’s take a look, shall we?History

Corks have been used as bottle stoppers for almost as long as we’ve had wine. In the fifth century B.C. the Greeks occasionally used cork to close wine jugs. Following their lead, the Romans used corks as stoppers, adding pitch to seal the closure.

Cork, however, didn’t predominate in those days. To seal a vessel, a thin film of olive oil was first floated on the surface of the wine (to minimize oxygen contact), then the jugs and amphorae were treated with a coating of pitch or gypsum. (And we think today’s wax caps are a pain in the ass.)

The use of cork was apparently abandoned completely in medieval times, as, apparently, were morals. Paintings from that era depict twists of cloth or leather stopping a jug or bottle, sometimes covered with sealing wax to ensure a secure closure.

The marriage of cork and bottle took place during the first half of the 17th century. The alternative closure of the time — stoppers (stopples) of ground glass made individually to fit each bottle neck — held its own for a remarkably long time. Stopples were still the closure of choice as late as 1825. Eventually these glass plugs (prototypes for the now-popular flanged bottles, I’m sure) were abandoned because they were nearly impossible to extract without breaking the bottle.

Though cork’s popularity eventually surged, one thing remained problematic: a tool that could be driven into it to easily extract the plug. The first mention in print of the instrument now known as the corkscrew was in 1681. It was described as a “steel worm” used for drawing corks out of bottles. This handy-dandy tool had been in use for 50 years to draw bullets and wadding from firearms and was originally called a bottlescrew. “Corkscrew” wasn’t coined until 1720.

The Source of Cork

Quercus suber. That’s the botanical name for a kind of slow-growing, evergreen oak that flourishes only in specific regions of the Western Mediterranean world. The tree requires a great deal of sunlight and a highly unusual combination of low rainfall and somewhat high humidity. The quality and thickness of the bark varies according to a tree’s specific growing conditions. Cork evolved into the tree’s spongy protection and insulation from, in particular, fire.

Most species of trees die if their bark is removed, because this layer helps carry sap, which is essential to the plant’s life. The cork oak tree, however, has two layers of bark. The inner layer is alive and is the base on which a new inner layer grows each year. As the old layers move outward and die, they serve as insulation, protecting the tree from hot, arid winds. Th

A cork tree generally yields between 13 and 18 useful harvests in its lifetime, though the first harvest of cork can’t take place until the tree is at least 25 years old. And even then, the product from the initial harvest is irregular in size and density, and isn’t suitable for wine stoppers. This substandard cork is generally used for floor tiles or sound-insulation materials. A whopping nine years must pass before the tree can be harvested again. Once again, cork from this subsequent harvest isn’t good enough to be used for wine bottling. It’s not until the third harvest — when the tree is at least 43 years old — that the regularity of size and density of bark cells makes the product acceptable for bottle use.

The cork bark is stripped by hand with the aid of small sharp axes, and the resulting cork strips are then stacked and weathered. The tree itself is carefully marked and numbered so future harvesters know when a particular tree can be re-tapped for its goods.

Cork is processed in factories in Portugal. Once processed, it’s stacked and aged for three months to let it weather and dry. Proper moisture content is crucial to the cork’s elasticity and compressibility.Oddly enough, after this drying period,

the cork is immersed in boiling water for at least 90 minutes. The heat serves to sterilize the cork and enables it to flatten from its original curved shape. After boiling, corks are set aside to “ripen” for three to four weeks in order to achieve the desired moisture level. Next, the material is trimmed into strips, and holes — the size and shape of wine bottle necks — 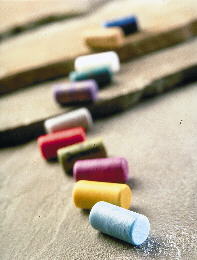 are punched into it by hand. This stage of the manufacturing process requires a keen eye as the hole punchers maneuver the strips for maximum quality (not to mention preservation of fingers). Next, the corks’ heads are polished to a specific, uniform length, the bodies polished for a specific, uniform diameter. The corks are then washed and dried. Most are bleached in either chlorine or hydrogen peroxide to remove any remaining impurities. Some, depending on specific wineries’ requests, are rinsed without bleach. Corks are graded for quality and branded with the purchasing winery’s name and, if the wineries are smart, their Web address.

A final surface coating of silicone and/or paraffin (or a resin), is sprayed or tumbled onto the cork’s surface. This treatment eases insertion into the bottle and improves the seal against the glass. Corks are then bagged in plastic and shipped to their final destination.

Houston, We Have a Problem

Corkiness — a condition caused by a chemical compound known as 2,4,6-trichloroanisole (TCA for short) — sometimes appears in corks. Seemingly, the unwelcome TCA is caused by the interaction of moisture, chlorine and mold trapped within the cork. At any point in time — from harvest of the cork to bottling of the wine — cork can be exposed to these three elements and TCA can form. What’s more, the human nose can detect TCA at concentrations as low as four parts per trillion(a thimbleful in an olympic-sized pool).

A “corked” wine smells musty, like damp cardboard or old newspaper. While posing absolutely no health problems, corked wines simply don’t smell or taste good. The ultimate problem lies in the fact that one may have shelled out a whole lotta bucks on a bad bottle of wine and there’s absolutely no way of knowing it until the bottle’s opened. A reputable vendor will replace a tainted bottle.
AlternativesAbout six percent of wines submitted for review to Wine X Magazine suffer cork-related defects. So why does the industry continue to use a faulty closure device? Can you say “tradition”? Sure, I knew ya could.

The revered tradition of cork will die hard and slowly. Though many find the use of cork an elitist holdover that renders opening a bottle difficult and esoteric — as is the intimidating ritual of cork sniffing in restaurants — the image of screw caps still conjures up images of “cheap wine.” (Note: If you’re in a restaurant and the stupid waiter hands you the cork, do what I do — take a bite outta it and hand it back to him. See what he says then!)

So What’s the Answer?

Well, there’s synthetic cork, like those made by Supreme Corq. These are made from a high-grade thermoplastic elastomer (say that ten times fast!), which looks and feels similar to real cork. These stoppers require a corkscrew for removal (to keep the traditionalists/elitists happy). And then there’s composite cork, composed of the purest part of natural cork (the Suberin) and fused at the cellular level with synthetic cells. (They basically look like little round particle boards.)

The only question about these alternatives is whether they’ll truly remain nonreactive and inert over long periods of time. Will they impart flavors to the wine? What about collectors? Will they be able to cellar their wine collections over a long period of time? (Course, the average American ages wine a mere 18 minutes — from the store to the house — so who cares.) Wineries are experimenting with synthetics and composites, but it’ll be several years before any results are known.I wonder if those magnet things Tina Caputo wrote about in the last issue would work? So we turn back to the screw cap. It provides an excellent airtight seal. It’s very consumer friendly — no more struggles if you forget the corkscrew. Screw tops also give wine a down-home feeling by removing the intimidating “elitist” image with which this beverage is so often associated. Thus, screw caps can make wine more accessible, both figuratively and literally. The problem? Wine producers — sensitive to the fine-wine market — hesitate switching to a screw cap because they don’t want their product to be perceived as having inferior quality. Again, this is only an image problem created by the wine industry and a few snobs.

Regardless of what closure a bottle has, the ultimate experience should come from the wine itself. Whether closed with a cork, twist cap or synthetic closure, the most important thing is the wine and the quality and enjoyment it brings to everyday life.