Home What We’re Listening To Portugal 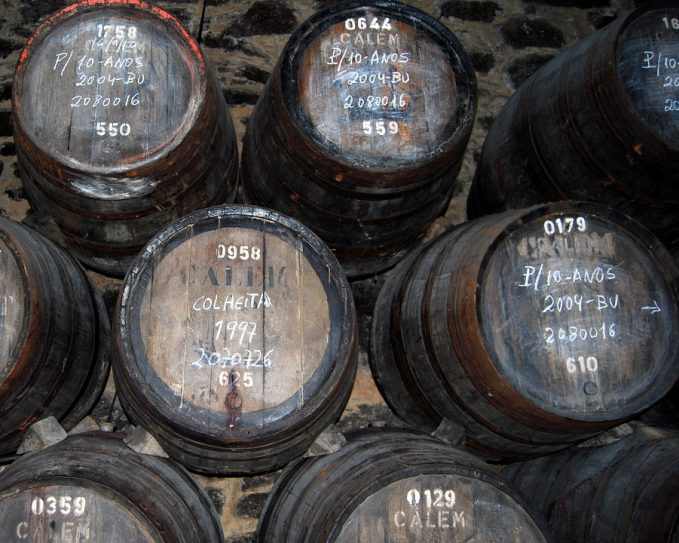 The Douro is arguably one of the most beautiful wine-growing regions in the world. Dominated by the Douro River, its terraced vineyards sprawl in an virtual amphitheater, creating a heaven for growing well-balanced, flavorful grapes.

Known for its Port wines, the Douro has recently made great strides to upgrade the quality of its unfortified table wines. Situated to the east of Vinhos Verde, the Douro valley is the oldest delimited wine region in the world, receiving its demarcation in 1756. For nearly two centuries the region’s demarcation applied only to fortified Port wines. But, in 1979, it was extended to cover tables wines as well.

About half of Douro’s production is unfortified table wine. In fact, fortified Port wines have only evolved since the end of the 17th century, when shippers added brandy to stabilize table wines during shipment. Grapes varieties used to produce both, however, are similar, with over 90 different varieties being permitted.

This is Portugal’s largest wine region, accounting for about twenty percent of the country’s harvest. Its name means “green wine,” derived from the region’s proximity to Costa Verde or Green Coast. Up until the 1950s, vinho verde was produced on a domestic scale. Wines were fermented in large open stone vats, then the juice was run off into casks. Here it would undergo malolactic fermentation, producing carbon dioxide which was retained in the wine giving it a light sparkle. These rough, usually cloudy wines are still consumed in local bars and cafes. Since the ’50s, though, more modern vinification methods have been implemented. For “traditional” vinho verde, carbon dioxide is usually added to the wine right before bottling to give it sparkle. Although vinho verde is traditionally bone dry, most commercial brands are lightly sweetened to appeal to overseas markets.

The Dao wine region, centered around the old cathedral city of Viseu in north central Portugal, has the reputation for producing some of the country’s best red wines. Its name comes from a river in the high country not far south of the Douro and well inland from the sea. Its beautiful countryside resembles that of Provence, France, with pine woods alternating with sprawling vineyards over monster, steep-sided sand-dunes, eventually rolling down into the rocky bed of the river.

More than two-thirds of the wines produced in Dao’s are red, made from any one, or a combination of, nine different grape varietals. Touriga national, one of the principle Port wine grapes, is regarded as the best in the region and must account for at least twenty percent of any red wine. Encruzado is the dominant white grape varietal, which is usually blended with others from the region.

The quality of wines produced in Bairrada are perhaps the only real rival to those made in Dao. The region sits between Dao and the Atlantic, north of Coimbra and south of Oporto. It’s low hills of heavy lime-rich soil have a greater vineyard area than that of Dao and about the same grape variety make up — 90 percent red. It’s climate is rather temperate, and grape varieties grown here are different than those of neighboring regions.

Two grape varieties are unique to this region: baga, a late-ripening red variety high in tannin and acid; and bical, a white grape which tends to harbor a nice balance between acidity and fruit flavors. Sparkling wine is also produced here, the majority made with the neutral maria gomes grape variety.

Portugal has long been known for producing some of the finest fortified wines in the world — Port. It hasn’t been until recently that the country’s table wines have gained attention. From the crisp, acidic whites of Vinhos Verde to the deep, rich reds of the Douro, Dao and Bairrada, Portugal is producing world-class table wines to rival those of any old-world producers.If you have the opportunity to travel the country, it seems as if every house in northern Portugal has its own little vineyard. Grapevines are usually trellised high on arbors, draped like canopies covering walkways, around the parameter of the small yards. This old traditional trellising on pergolas of granite post and chestnut lintel serves several advantages: it slows the ripening process, producing a desired sugar/acid balance; it keeps fungus diseases to a minimum; and the traditional practice allows the planting of crops underneath.

Moving east, vines are planted in the more traditional manor, taking advantage of more mechanized means of harvest. Trellised vineyards weave in and out of picturesque vistas along the Douro River, flattening out a bit as you move south into the Dao and Bairrada regions. Here, reds are king, producing deep, concentrated often tannic wines that need a bit of age to soften.

The Segregation of Wine
1,180 views