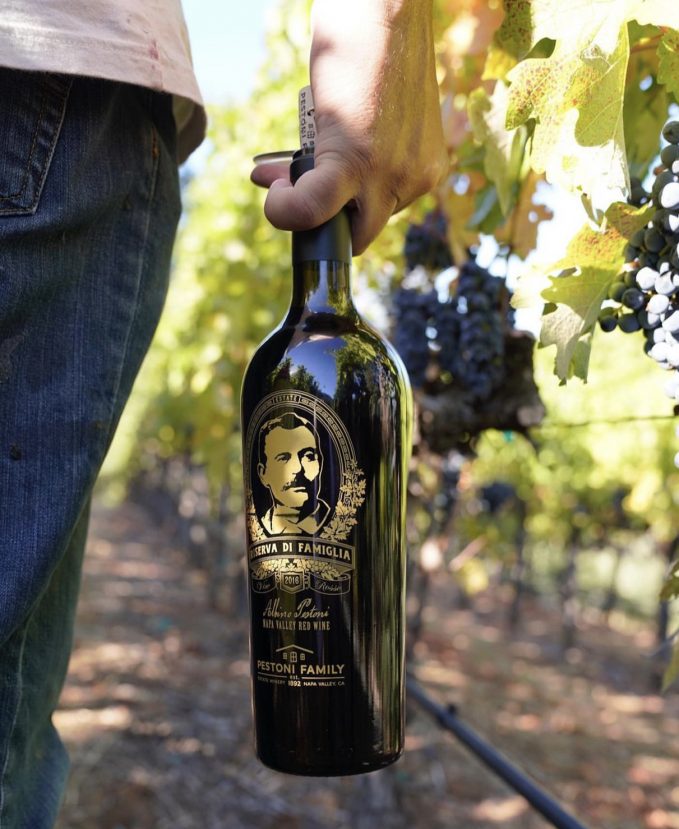 When I hear the words “hidden gem” applied to wine, I usually think about an emerging region or a new label with a savant winemaker.  Napa is full of iconic labels, exquisite juice, and a rainbow of colorful stories.  There’s a cool, sometimes hidden story in every tasting room. Just ask. 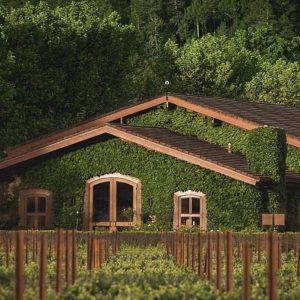 But some tasting rooms are a little harder to find…… So follow me into Pestoni Family Vineyards over on the 29 near Whitehall Lane, where Greg & Andy Pestoni joined me for a glass and a chat.

“What’s our signature? It’s probably fitting to say that we are like your favorite neighborhood Italian restaurant… the one that has been around 50 years…where everything tastes great…. and the menu has amazing depth….  With every glance around the room and every bite, you feel like you’re inside the story,” Greg shared.

Here’s the back story:  There are only a few Napa families that can claim hometown status as far back as the Pestoni family can.  The Swiss-Italian family came to Napa in the late 1800s  from Ticino, Switzerland, where they can trace their family back more than 500 years. And it turns out that they trace their winemaking roots back that far too. A familial expression of Terroir,  “A historian told us recently, ‘your family has basically lived in two places for over 700 years,” Andy shared.

Today, the Pestoni’s operate very small production family operation that pulls fruit from some of the most revered places in Napa.  Honest, hard work and awesome juice have built a loyal following. Count us in among that group now

I had such a great time with Greg & Andy Pestoni that I’m going to bring their story to you in two parts and share a couple of their X-Rated wines in each.

Wine X:    Start me at the beginning.  Where did all of this begin

Greg:     Our family’s Napa story goes way back to around 1880.  We were a part of the original Swiss Italian enclave that settled just outside of St Helena.  Like many of their neighbors, our family built their livelihood on the land and whatever they could do with it.  Farming, livestock, dairy, and of course, wine.  Over time, our great grandfather, Albino, started making wine for friends and family.  It must have been good stuff because it wasn’t long before he was producing and selling for paying customers.  No sexy bottles….  Albino’s wine was sold by the gallon jug or even by the barrel.

Andy: Of course, Prohibition ended all of that, at least legally.  (laugh)

Greg:  Yeah, we don’t have any really salacious stories, but let’s just say that that our family  continued to refine our collective skills. (more laughs)

Wine X:   You can’t leave me hanging.  Tell me the family inside skinny.

Andy:  Well, here’s one.  There were definitely some logistical advantages to being up here in the valley. Let’s just say that, compared with the risk that  speakeasies and distilleries in San Francisco’s faced, being out here in the sticks worked in our favor. At least that’s the family folklore. 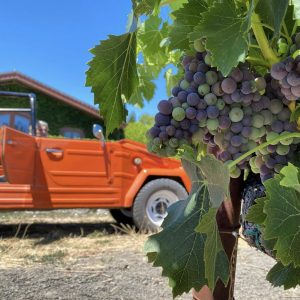 Greg:  Yeah.   So, think about it.  The federal authorities, like the FBI, were all down in San Francisco.  So, tell your readers to go look at a map if they don’t know our area……There are only a few ways in and out of Napa.  So it’s not like you can bring an entourage of authorities, sirens blazing, up from the city and into Napa without being noticed.

Andy: And of course, Napa has always been a tight-knit community. If the local authorities were alerted in advance, well, everyone in the valley was alerted too.  With a few hours to scramble, It wasn’t hard to hide what needed to be hidden.  No arrests. No craziness.  Just  good wine (laughs).

Wine X:   Just let me know when I need to redact anything….”

Wine X:  Roger that. So pick up the story after Prohibition

Greg:   Making wine has never been an easy career.  Some of the family kept at it after Prohibition, and a lot more moved into spirits, and the others jumped into dairy.  Those were the typical ways that families were able to “move down off the mountain.”  My grandfather did all three to make ends meet.  Our uncles decided to make a go of wine at Ehlers Vineyards, or what we used to call Old Bale Winery.

That mix of livelihoods worked for most of the family for the first few generations after Prohibition, but our father, Bob Pestoni, thought he might give something else other than wine a try. Our dad had seen two generations, their struggles and successes…. and, well, not unlike the Napans of this generation, at least wanted to try something else first……” 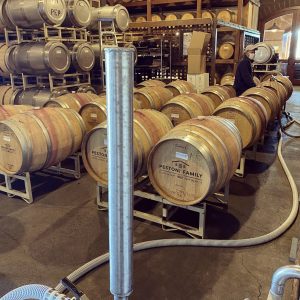 Andy: Back then, making wine was about as sexy as picking walnuts. Dad managed to get the franchise for hauling waste……..ironically it was waste largely from wineries from Yountville up to Lake County.   That turned into being a great business and its success gave dad the chance to buy land here in the area.  Originally, most of that land was purchased for ideas other than grape growing….. like we bought some property around Whitehall Lane, assuming that it might be a strip mall one day.

Greg:  “ Yeah, and our Howell Mountain property fit that description too…..  when we were kids, we’d go up there and be KIDS. You know, drive Jeeps & do silly things.   As adults, we went up there with my former bother-in-law, David Abreu, and he convinced us that there were thirteen or so beautiful acres that were plantable with some effort.  Who knew that either of those properties would make incredible wines.

Wine X:  I have to ask…… did David give you the friends and family discount?   He’s been a big part of so many of the ultra-premium cabs around you.

Both: “ Oh nooooooo….. He might have charged a premium”  (laughs)

Andy:  “Seriously, David is great, and even though he and my sister aren’t together anymore, we’re still family, and we support each other, just like everyone in Napa does.” 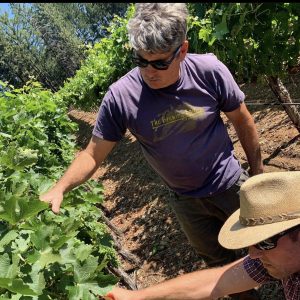 Greg: “Howell is something special, and we work with our Howell neighbors  to be advocates for the AVA.  That place makes really special wines.

We call our Howell property Three Tears …… which is sort of tongue and cheek.  It’s heavily terraced, in three tiers….. But we all remember how hard it was waking up that incline when we were kids roughhousing up there…. even in our spry youth, it felt like you were shedding tears as you hiked up up the incline.”

Andy:  Our Howell wines are really smooth compared with what most people think of when they hear the words Howell Mountain cabernet.   Our vineyards get a little more of the eastern influence, as well as some of the warmer summer temperatures that come up from the Pope Valley at night.   It’s like an inversion layer of sorts.  So, when you compare our stuff to the others on Howell, it’s not unusual for us to pick a week or two earlier than the vineyards that are either a little higher up on Howell or those that are just naturally in a cooler spot.

It’s interesting. I think both of our Three Tears cabs the right balance of the intensity of a mountain cab with volcanic soils plus some marine influence.  There are not many places quite like that vineyard, and because of it, our cab tells a great story of place and time.  Our current release is 2018. It might take a little to open in the glass, but you can love on that bottle today as easily as you will in 2032

Greg:  One of our blocks.. Block B… which is the middle terrace… we know it’s something specials, and so we so a special wine from just those grapes.  Book B has got that same red rocky volcanic soil, but it gets a little help from being against the hill….. and that means it gets a little shade.  And that gives us a slightly different expression.  We put it in 100% new French oak.  When it’s ready, what we get is this really big cab, with the right acidity to age gracefully.  It’s what you hope to make when you have this kind of land to work with.

Wine X:  Did you guys have to deal with any problems with the fires on Howell?

Andy:  Every year is different…. Right?  All are a little crazy.  We didn’t deal with the fires last picking season, but that didn’t mean it was an easier year.  It was challenging on its own because we didn’t get a lot of rain, and that made for a really intense wine. I’m really looking forward to releasing it someday. When Greg was saying that we only get two tons an acre in some places… well ….last year, we were only getting one. But  wow, it’s going to be amazing when we release it!    But back to your question. You asked about the fires. Yes, the Glass Fire burned everything around us, but it left the vineyard alone thank goodness.   Who knows when we’ll get electricity restored up there.  Fortunately, we don’t have a need for much than what a generator can supply.

The Segregation of Wine
1,429 views

Clean Wine: Why Cameron Diaz is Fine, and Why Your Anger is Misplaced
1,408 views