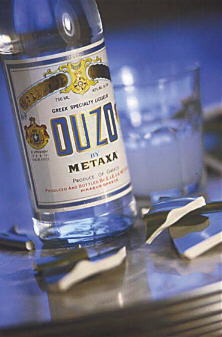 The Greek prostitute in the movie Never on Sunday enjoyed it with myriad men. Aristotle and Jackie O. had it regularly on the Greek tycoon’s luxury yacht and private island paradise. Anthony Quinn indulged in it in the epic Zorba the Greek. And Greeks the world over still savor it — some even several times daily. But perhaps you’re afraid of it, the fear lurking somewhere deep in the backdoor recesses of your psyche. Perhaps you’re hesitant about something seemingly so exotic, so unconventional. Maybe you’ve been cautioned to beware of Greeks bearing gifts. Or you were turned off by Pythagoras and his theorem in your pimply adolescence. Or Homer and his epic poems in Freshman Lit. Don’t fret, ye nave and timid souls. We’re speaking of drinking ouzo, which need not be a daunting experience. Get over it, for behind your fears lies a great reward.

Ouzo is the classic Greek anise-flavored liqueur, though most countries along the sun-drenched shores of the Mediterranean have their own version, including the Sambuca of Italy, Raki of Turkey, and Pastis of France. One of the most famous versions is Absinthe, a favorite libation of writers and artists at the last fin de siecle. (Absinthe was also flavored with oil of wormwood, which inspired hallucinations and heady addictions and is now illegal in most countries in the world, though it’s still available in bars in the free-flowing Czech Republic).

Like many of the hallmarks of Western civilization, anise flavoring first flourished with the Ancient Greeks. Its popularity spread almost as quickly as the ideas of democracy and toga parties, and has been every bit as potent and enduring. Today Greece boasts hundreds of boutique ouzo producers along with a handful of major exporters. You’ve probably seen the clear liquid in the bottle draped with the bright red and black label “Ouzo 12,” the most exported brand worldwide. Legend has it that of all the barrels produced, drinkers preferred that of barrel number 12 — hence the name. Thus, kitschy Greek souvenir shops carry tacky T-shirts emblazoned with bloodshot eyes and: Ouzo 12, Me 0.

Produced from the pressings of grapes, called tsipoura, ouzo is a harsh, clear first distillate. The distillate is doctored with secret combinations of herbs and spices, notably star anise, which lends the bold licorice flavor, as well as with various blends of fennel, nutmeg, cinnamon, mint, wintergreen and hazelnut. The potion is barrel-aged to attain a more mature, smooth flavor, resulting in a clear, odorless liquid of unique taste and characteristics.

When consumed in American bars, ouzo is often tossed back as a shot — neither the most pleasant nor the most interesting way to drink it. Do it Greek style and order a measure of ouzo in a glass with an ice water back. For starters, sit and stare at the clear liquid before slowly pouring your ice water in. Miraculously the clear ouzo turns a milky white. It’s like performing your own chemistry experiment, only you get to drink it. (You’ll want to order another one just to see the sprightly transformation all over again.) If you’re the very patient sort, order your ouzo over ice, and watch it slowly turn opaque as the ice melts, diluting the anise oil and emulsifying the 80 to 90 proof alcohol. This experiment works far more successfully when you’re ensconced in a comfortable taverna on the shores of a Greek island, but it can also be conducted in your favorite local bar with similar, if less magical, results.

Greeks regularly visit their neighborhood tavernas and order ouzo while contemplating life’s many mysteries. The potable is generally served with a snack of nuts or Greek olives as a relaxing afternoon interlude or as a pre-prandial aperitif. There are specialty tavernas, known as ouzeries, which serve their house brands of ouzo along with appetizer selections known as meze — such things as pita bread, taramosalata (fish-roe salad), calamari, saganaki (fried cheese), grilled squid and local vegetables. Though they drink much more often than Americans, Greeks generally don’t get drunk; rather, they savor their daily doses of ouzo, along with good food and companionship, as an accent to their outings rather than as the primary purpose of them.