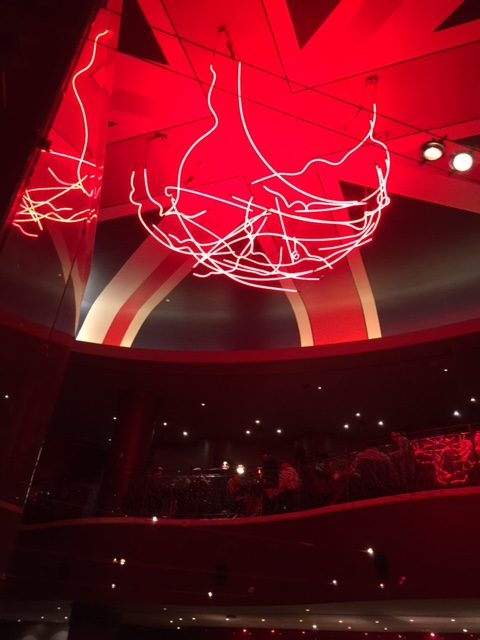 Checked out Gordon Ramsay’s Steak place in Las Vegas with some friends.   Sadly we apparently missed the man himself by a few hours but he autographed some deserts in chocolate writing for a lucky few.   What makes a place like this really hard when it’s a one and done stop is figuring out what to order such that you don’t get remorseful later.   Too much that looks too good.  I’ll have a hint you shouldn’t pass up in a few.

Per usual, the table sent the wine list down to me –  which I don’t mind all that much.  Its worth saying though that this is one of those lists that even a monkey throwing darts cant mess up.    And also per usual, getting the wine list came with  an occasional shout from the table to pick something in particular….  Sigh.   Its Ok. It happens.  Its my choice whether or not to be a pushover.  And honestly, this place doesn’t have a bad choice but some choices are better than others.  Know what I mean?

They had a new bottle of Caymus that was a table request and I thought it would be fun for the group to try it up against something interesting. Kinda hoping to make a point.  Scan scan scan…Pop!. There!…..  and wow!   They had a aged bottle of Bressler cab.   No Al Gore, you didn’t invent the internet, but Bob sure might have.

But a ten year old bottle of Bressler, clearly nicely cellared, really showed my group what happens to a really nice cabernet if you manage to resist drinking it for awhile – which is hard as hell. Lets be honest.   That it was unblinded took nothing away from the experiment.  With one sample of each, I smiled without comment as the table tasted….. back and forth from glass to glass…..  “wow”, “Ok. That’s amazing”, “can you get stuff like this in real life?”, “someone take a pic of that bottle”.

So here is the hint I promised and just straight up I’m saying that this is more like an instruction than a hint…..  if you have a table of 4 or more, ya gotta order the Beef Wellington for the table and have your sever slice a piece for everyone tableside.  Kids, don’t try this at home….  Its like little bitty explosions in your mouth and tummy. 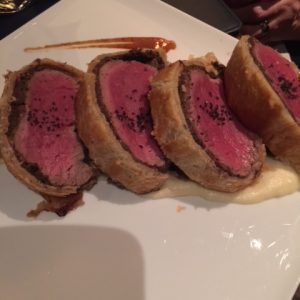 Book early, save up.   some things live up to the hype.