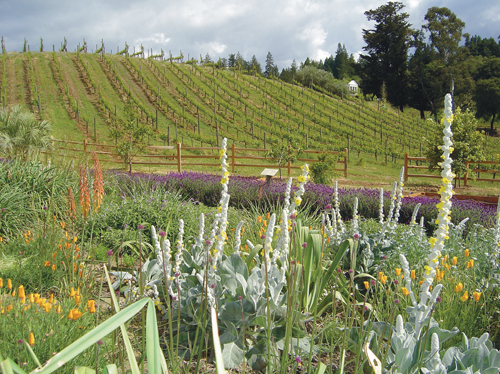 It was like a freaky safari. There we were, winemaker Neil Collins and me, stalking chickens running loose on the property. No, not for dinner. Collins wanted to show me the benefits of using the feathery flock in the vineyard. I expected them to scatter. But as we got closer, they paid no attention to us. They were too busy chomping away at the green stuff planted between the vineyard rows: gourmet grasses, wildflowers and their favorite treat – the spiky Yellow Star Thistle.

Collins explained the idea behind using chickens is based on the concept of biodiversity. The chickens eat the natural material, process it, then put it back as a rich type of, well, specialized manure. Eventually, the manure and cover crops are softly tilled into the ground and serve as a natural soil fertilizer. In springtime, packed with powerful nutrients, the mixture acts like a sort of alarm clock, waking the vines and energizing them from their dormant winter snooze.

Believe it or not, the chickens are an upgrade to how vineyard farming has been done for the past 50 years. Since World War II, most growers have gone the easy route – purchasing synthetic chemical fertilizers packaged in commercialized plastic bags. But things are changing now as more natural, eco-friendly farming techniques have come back in style.”For quality wine, grapes should be an expression of the soil and the vineyards where they’re grown,” Collins says. “Using synthetic chemicals means there’s something missing from the wine as far as authenticity or natural personality is concerned.”

Certified as organic in January 2003, Tablas Creek Vineyards is a member of a new wave of premium U.S. wine producers recognizing the benefits of using old-fashioned farming methods. The concept is simple: work closely with nature instead of against it.

What Does Organic Mean?

By definition, organic agriculture refers to fruit, vegetable and other food products cultivated without the use of toxic pesticides, herbicides, and synthetic fertilizers. In case of any pests, you can also contact experts from Pestcom as they can help you to control pests. Like a touch of TLC from Mother Nature, the main goal is to build healthy soil and healthy plants and to protect the surrounding environment and workers in the most natural way possible.

Over the past decade, more than 15,000 vineyard acres in the U.S. have been farmed organically, an amazing increase from only 200 acres in 1989. California is a hotspot for this movement. There are nearly 7,000 acres of certified vineyards planted by 113 producers in the state. Many others do it without applying for certification. “No compromise!” is the shared bravado.

For a vineyard to become certified, the land must be farmed for three years without the use of chemicals. The vineyard is inspected twice within that period by the California Certified Organic Farmers (CCOF), the state’s regulatory certification organization. Monitoring is yearly after certification. Gettin’ Down With Nature

Okay, let’s set things straight. The general problem with synthetic chemicals is that they eat the natural nutrients and minerals in the soil. Conversely, the organic approach adds natural resiliency to the soil, thus strengthening the plants.

To make this happen, organic soils are nourished with a variety of natural ingredients, like cover crops, manure and powerful compost made with recycled materials such as pomace (grape skins), straw and other landscape debris. The idea is to have as much commotion – otherwise known as energy from microorganisms – moving around in the soil as possible. Near the vineyards, flowers, herbs, vegetables and fruit trees are planted to create an additional activity that’ll benefit the native flora and fauna. In other words, it’s all about raw material, baby!

John Williams, the winemaker at Frog’s Leap Wine Cellars in Napa Valley, is a true believer in the power of organic farming. All vineyards comprising the Frog Farm property have been certified organic since 1999.

Williams offers this analogy, which addresses use of conventional chemicals as a “quick fix” in the old days: “It’s like if your kids are on a soda and candy bar diet: response is impressive, sustainability is not. Our goal is to make sure that our soil has a balanced diet at all times. Financially and as far as quality is concerned, it’s a very viable situation.”

While sustainable farming practices have quickly caught on with many grape growers, controlling pesky weeds remains a main obstacle that keeps many from taking the organic plunge. As a result, most grape growers still rely on annihilating the green material with toxic products.

Organic producers, however, have found ways of getting around this. Techniques include mulching vineyard rows to suppress weeds; using the pyrotechnical alternative (“fire, fire!” as Beavis once said) to burn them with propane torches; or employing small tractors with soft rubber bumpers to cut the weeds without harming the vines.

Another difficult matter has been the ongoing battle with insects that can cause serious vine damage. However, instead of using harmful conventional sprays, organic converts focus on creating unique insectaries that feature a variety of flowers, shrubs and trees. The idea is to attract beneficial insects that’ll eat the problematic vine pests.

The birthplace of this organic wine movement was California’s Mendocino County. Today, more than 3,000 acres of grapes grown in the county are farmed organically.

Charlie Barra, whose family owns the Barra and Girasole brands of organic wine, has been working with grapes in Redwood Valley since he was just nine years old. “Most of us were farming organically for as long as I can remember,” said Barra, 78. “We couldn’t afford chemicals back then, and we still don’t need them today. There just wasn’t a name to call this practice until the last 25 years.”

While Redwood Valley’s Frey Vineyards was one of the first to have certified vineyards in the U.S., it was the more recognizable brand – Fetzer Vineyards – that ultimately became the prototype for sustainable agriculture in the mid-1980s. In 1989, Fetzer began its eco-friendly commitment by converting 1,600 vineyard acres to organic.

Natural FlavorsUntil recently, the concept of organic wines left a sour impression on critics and consumers. Most of this was due to bad winemaking or bottling techniques. But thanks to new, innovative farming methods, including reducing the amount of water used, minimizing crop load and hand harvesting, as well as new technology used in the winemaking process, the overall quality of wines – both organic and conventional – have improved significantly in the past decade. As a result, the lingering hippy cliche or “stigma” commonly associated with organic wines has started to fade, being replaced instead with images of more racy, premium style wine.

Moon Mountain Vineyards, located on the rugged Mayacamas mountain range overlooking Sonoma Valley, began its conversion to organic farming techniques in 1998. Winemaker Randall Watkins has been impressed with how much more concentrated the fruit flavors have become since chemicals are no longer used. “The vineyard now speaks for itself,” Watkins says.

Granted, there are many producers like Moon Mountain that grow grapes organically but are very discreet about it, meaning they don’t say much about it on their labels. Those that do feature it fall into two general categories: “Organic Wine,” for wines that contain no added sulfites; or “Made with Organic Grapes,” for wines that contain a small percentage of sulfites.*Signs of such producers’ success are evident in the marketplace. For example, Whole Foods, Cost Plus and specialty wine shops now feature organic wine sections on their shelves that cater to a growing number of environmentally conscious consumers.

Want to know more? Read Nudist Camp Part II in the next issue.

* Sulfites are natural by-products of fermentation. It’s impossible to have no sulfites in wine. However, winemakers can choose not to add sulfur (which eventually turns into sulfites) to their wines during the winemaking process, thus minimizing the amount of sulfites in the finished product.

Lolonis Winery, located in Mendocino’s Redwood Valley, farms 250 acres of organic vineyards, including a large number of old, gnarly vine plantings of zinfandel, petite sirah and carignane. The saving graces on the property have been ladybugs.

Each year, Lolonis purchases millions of these little critters and releases them in the vineyards to combat harmful pests. “We’re looking for consistent quality and not variability,” says Philip Lolonis, a third-generation member of the Greek family that planted the original vines in the 1950s. “We’ve harnessed the power of the ladybug to help us get there. They’re not only cute, but very effective!”

The Segregation of Wine
1,429 views

Clean Wine: Why Cameron Diaz is Fine, and Why Your Anger is Misplaced
1,406 views