Home The Many Blessings of Napa’s Atlas Peak Fire

The Many Blessings of Napa’s Atlas Peak Fire 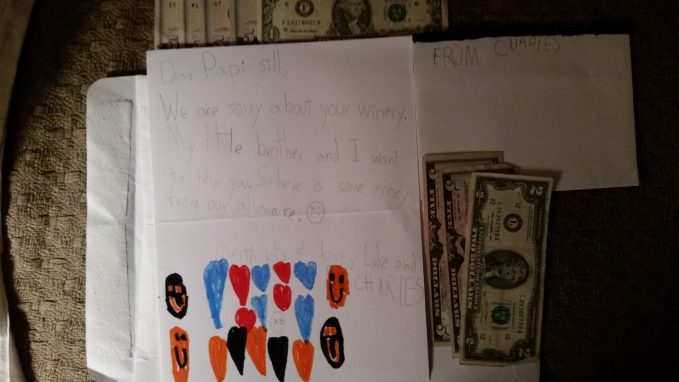 For the Sill Family which has operated a vineyard in the Napa Valley for over 20 years, the tragic fires that hit them in early October could never have been imagined.

The Atlas Peak Fire and surrounding fires caused so much damage, displaced so many thousands, and taken far too many of Napa’s community that it’s difficult to find the words to describe their grief.

Their wounds feel as raw today as they did just a few short weeks ago, and they fear they may never be completely healed, as they understand that far too many are still struggling now and will continue to struggle in the years to come.

If there has been anything to provide hope in these trying times, it has been the outpouring of community support the Sills have witnessed in Napa Valley — from family and friends, yes, but from strangers and good Samaritans alike.  From people who read the news from far away or those in their own community who bravely fought the fires or offered a helping hand.

As the Sills rebuild their Atlas Peak mountain winery and look forward to better days, they have been touched beyond measure by the support, grace and kindness of so many.

In response to this crisis, their friend, Marc Benioff, founder and CEO of San Francisco-based Salesforce, is leading a coalition of Bay Area business and community leaders to support long-term recovery and rebuilding. This effort kicks off with a benefit concert on Thursday, November 9th with the best seats going to first responders, volunteers, and others impacted by the fires. 100% of ticket sales will be directed to the Tipping Point Emergency Relief Fund, supporting community partners working on the front lines to help those hit hard and includes grants to Community Foundation Sonoma County, Napa Valley Community Foundation, the North Bay Fire Relief Fund established by The Press Democrat, and Catholic Charities of Santa Rosa.

The Napa Valley Community Disaster Relief Fund, which was established with a $10 million lead gift from Napa Valley Vintners after the 2014 South Napa Earthquake, has been offering money and support to those affected by the fires.  They mobilize resources, inspire giving, build knowledge and provide leadership on vital community issues to improve the quality of life for all in Napa County. They are also supported by hundreds of local givers, and have attracted several million dollars in additional resources from other foundations, including: The California Endowment; The California Wellness Foundation; The James Irvine Foundation; The David & Lucile Packard Foundation; and The William & Flora Hewlett Foundation.

And perhaps best of all, in an act of kindness that brought the Sills to tears, two young boys from the kindergarten class their daughter used to teach in San Francisco mailed them a note and included money from their own allowances. Thank you, Luke and Charles Allan. You have truly touched their hearts and given them so much hope.

So, the Sills will rebuild. That’s what they do. That’s what Napa Valley has always done, whether through harsh winters, droughts, pests, earthquakes, or, whatever else is thrown at them.  Napa has met challenges before and this one has unfortunately touched so many.

But, they can’t help but also dwell on what has always pulled Napa through: the community support and Napa spirit here and beyond; the donations, the volunteerism, the hard work.

And, for the Sills, that very special envelope from two young boys with a truly thoughtful note and a few dollars from each to let them know it will all be OK again.

We have a feeling they’re right.

Nov 23, 2017Wine X
It Ain’t the Beaus Ya Know… It’s the Beaus Ya Lay!Peanut Butter and Pinot Grigio The Regular Person’s Guide to Food and Wine Pairing