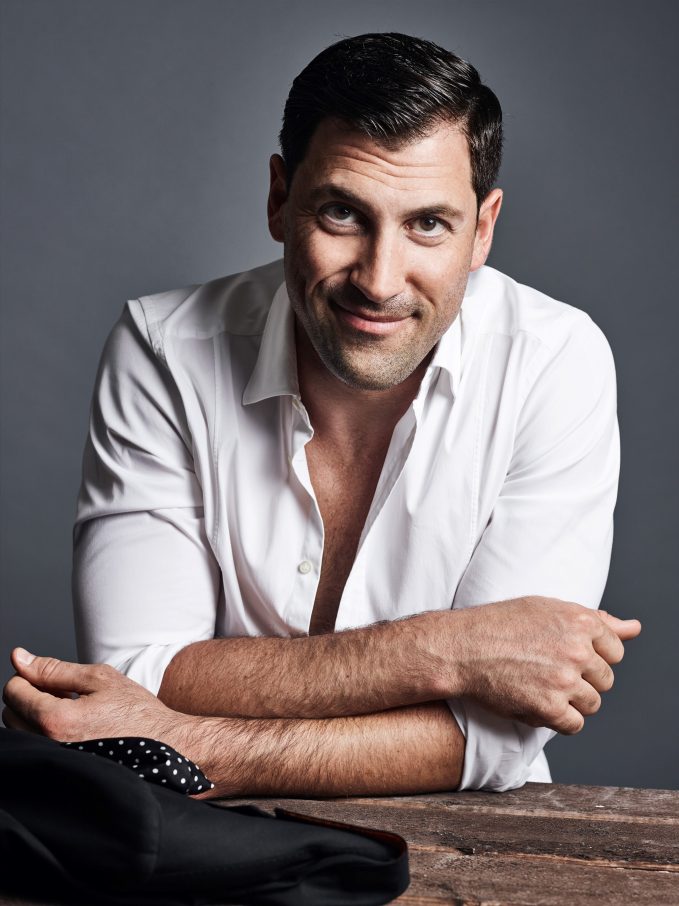 For more than a decade, Maksim Chmerkovskiy dazzled Dancing with the Stars fans with a superbly versatile talent for ballroom dance cultivated through his Ukrainian roots and with a family tradition that began with his mother, Larisa Chmerkovskaya. A love of dance was passed down to Maksim and his younger brother and DWTS cast member, Valentin Chmerkovskiy. One of the first things the family did upon emigrating to the United States was to open a dance studio in New Jersey, as the brothers traveled the world competing in dance competitions and racking up trophies for their prowess. When Dancing with the Stars came calling, it took some convincing to get him on board, until his younger brother Val gave him the nudge to venture out to Los Angeles and give television a try.

Having completed seventeen seasons of the juggernaut television show, Maks’ celebrity dance partners have included Vanessa Lachey, Brandy, Melanie Brown, Laila Ali, Melissa Gilbert, Denise Richards, Tia Carrere and many others. Maks now marvels at the irony of what his television fame has given him, including his beautiful wife and fellow DWTS pro, Peta Murgatroyd. “We met on Broadway, but the reality is I would probably not have been on that Broadway production had I not been a certain level dancer on television,” he happily admits.

His notoriety and large fanbase has also offered him a spotlight from which to launch his 501c3 nonprofit organization, Baranova 27. The public nonprofit has been providing continuous resources, including housing, to Ukrainians during the country’s ongoing war with Russia and its fight to remain an independent and democratic nation. 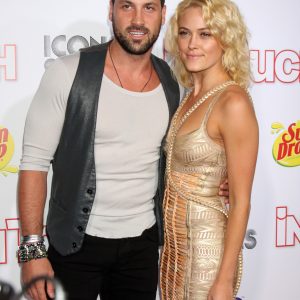 Allison Kugel: I would love for people to know your early story. What prompted your family to leave Ukraine when you were fourteen and your younger brother, fellow Dancing with the Stars pro Val, was eight?

Maksim Chmerkovskiy: My family got up and left [Ukraine] because of the opportunities for us in the U.S., but also because of the [Soviet] army reserves and the way you were being put on their list.  The army back there was mandatory, and so my parents looked at me turning fourteen and thought, ‘Okay, he is next.’  As a matter of fact, at fourteen I was already put on the list for when I would turn eighteen. As we were finalizing our documents [to emigrate to the U.S.], that’s what happened.  All of a sudden, I was in school and someone came in and they put me on the list. My mom started freaking out, thinking they are not going to let us out of the country.

When we emigrated to the United States and I started to mature and grow up, and I talked to my fellow immigrants and I realized it wasn’t all gravy [in the former Soviet Union). My dad wasn’t able to go to the university he wanted to go to. He actually wasn’t allowed into a university, because he was Jewish. He had to go into the Merchant Marine in order to also not fall into the army.  All of those things made it not the place you wanted to raise your kids, let’s put it that way.

Allison Kugel: Then you landed in New York City and settled in Brooklyn. How were those early days?

Maksim Chmerkovskiy: We landed here. We moved on from where we came from.  We weren’t focused on the immigrant part of it. But there were food stamps, there was welfare and government assistance programs. We were given plastic chairs. I remember we were a family of four and we got furniture that was donated to us by a Jewish organization. I remember we got a table and three chairs and I thought, “That is odd. There are four of us.” My parents both had two jobs.  Not the jobs that you would be proud of but… we are talking about dishwasher and delivery boy. This is while trying to learn English and while trying to get some kind of education going.  All of those struggles were crazy, but we felt good about it.  We felt romantic about it.

I got beat up on the second day here, so talk about “Welcome to America.” Half of the kids that beat me up were fellow immigrants. It was a United Nations welcome. There were a few moments that toughened me up.  If everything was roses and butterflies, it would have been different. My path, and the overcoming of some things, it’s not me patting myself on the back, but saying that the circumstance behind my life was such that it shaped me to do this. If the circumstances were easy, maybe I would be something different.

Allison Kugel: Then you returned to Ukraine earlier this year just as Russia invaded the country, and you were finally able to get out of the country and into Poland. What was that experience like for you?

Maksim Chmerkovskiy: There was the announcement. “This is the train going to Warsaw.”  The people that were with me shoved me on the train and then the doors opened and all of these people just bum-rushed it. Just to give you a visual, the train car is made for 30 people. We had 137 people on that train. It was so packed to where I realized I’m just taking up way too much space, so I moved myself and put myself in a little place that was in between the train [cars]. Then all of these people felt bad for me because I was freezing, so I came back in and warmed up. Someone made me a sandwich and then everybody went to sleep, and there became literally no space to stand because everybody is just laying down everywhere.

We saw a mother who was right next to me. She got on the train with her two kids, but in the process of getting on the train she had to dump all of their stuff.  So now she has a wallet and two kids, and nothing else.  We had to collect some milk and formula for the baby. I mean, I have a five-year-old and we are freaking out when his day is not going according to plan, right?  This is just so horrible and crazy.

Allison Kugel: You made it back home to Los Angeles safely and then you returned to Warsaw, Poland to help out as Ukrainians were fleeing into Poland. And you and your family launched your 501c3 non-profit organization, Baranova 27 to continue helping Ukraine. Tall me about Baranova 27 and the work you are doing.

Maksim Chmerkovskiy: Any organization of this sort starts with a nucleus and I was the nucleus. I got stuck in Ukraine and it turned into national news. I was sort of the poster child for this, and people thought, “This is a person we trust because he is constantly on television and we know him from this show (Dancing with the Stars), and he’s not political. My dad, my mom, my brother, everybody immediately felt all this fear and anxiety for me, but we all collectively felt for the Ukrainian people, including people that we know.  I have friends now directly from Ukraine, not Ukrainians in America, so there was a lot of association.  Baranova 27 started immediately.  Initially it all started with GoFundMe where we raised about $400,000.  We have been sending things over by air, by ships in containers; currently we have two big containers on the way over there, but we have now shifted our efforts to trying to provide housing for displaced Ukrainians.  A lot of people are now coming back to Ukraine to help with the war efforts, and so that is our goal now, is building mobile homes.  We are calling them Baranova Villages. They are mobile homes that we buy in Turkey or from local manufacturers in Ukraine, that we put up and turn into little settlements. 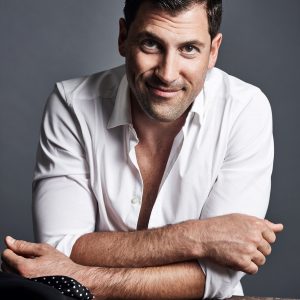 Allison Kugel: Have you reached out to Ukraine’s President Zelenskyy to align your efforts?

Maksim Chmerkovskiy: I have connections to the president because he comes from the entertainment world.  Not only that, but I think a few years ago he actually won Dancing with The Stars Ukraine. I have some friends who are his very close friends, but I don’t need his support and I don’t think he needs mine at the moment. He needs all of us to do what we can do.  I actually don’t want to bother him with yet another nonprofit. When there is a moment that I need his participation, I will reach out. Right now, I’m sure he has a lot to deal with, and the idea of nonprofits like mine is to help, not to be helped.  We are the ones providing the help.  I’m not doing this for recognition and neither is my dad or any of the people involved. When I need President Zelenskyy’s support in order to gain something, then I will reach out. Right now I just need to appeal and reach out to people and continue doing the work that we are doing to get likeminded people to be a part of our organization.

Allison Kugel: On a lighter note, I heard that you had originally turned down Dancing with the Stars when they first approached you, years ago, to appear in the show’s first season.

Maksim Chmerkovskiy: Dancing with the Stars started their first season, and I remember it was a pilot season during the summertime and the phone rang; “Hey, it’s Dancing with The Stars.”  I literally hung up right away. There were another ten calls and I just kept hanging up. It was not my plan.  It was not what I wanted to do. It was nothing to do with my future. My future had to do with winning the world title (for ballroom dance).

Allison Kugel: Being on the show also led you to your wife, Peta.

Maksim Chmerkovskiy: We met on Broadway, but the reality is I would probably not have been on that Broadway production had I not been a certain level dancer on television.  Peta was one of the starring characters in a show called Burn the Floor when it came to the U.S., and it was already a popular production all over the world in countries that were ballroom-dance friendly. It was the first ever ballroom-based stage production that was a worldwide phenom.  When it came to the U.S., they asked me to be one of the stars, just to basically sell tickets in this country, because I’m big-name dancer in this country on television. When Peta and I met she wasn’t really fond of me because she thought, “Who is this celebrity coming in and taking up the whole center stage space?” And in reality, I was just there to sell tickets.  But she saw me for who I truly am on the inside, and she fell in love,  I believe at first site. But she is never going to admit it (laugh).

Allison Kugel: And now you’re a veteran and one of the show’s biggest breakout stars. What is your future with Dancing with the Stars?

Maksim Chmerkovskiy: Well, my wife is on it, my brother is on it, and my sister-in-law is on it. I feel like I’ll be waiting until one of our kids is joining it, like 20 years from now! I’m in perfect health and I try to stay that way for whatever comes at me.  If Dancing with The Stars comes to me and says, “We want you as a pro. Let’s go back to shake that tail feather one more time,” I’m in. I’m definitely shaking it in other ways and on other platforms, but I have not danced my last dance yet, let’s just put it that way.

Pride (In The Name of Cabernet)
33 views