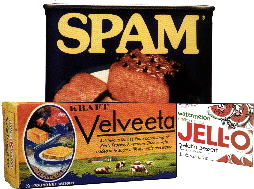 A few Halloweens ago, I showed up at a San Francisco street party dressed as a giant can of Spam. That day, I learned what it is to be adored.

I was like the Elvis of processed meat — strangers actually cheered as I walked by. A guy in a PEZ costume high-fived me shouting “Spam rocks!” at the top of his lungs. We bonded.

But how cool would I have been if I’d come dressed as something like, say, a Powerbar? Can you say “DORK”?

There’s just something irresistibly cool about the foods we grew up with. I’m not talking about mom’s apple pie here — I’m talking about what we really ate: Twinkies, Wonder Bread slathered with Miracle Whip, SpaghettiOs and, oh God yes, Spam.

Even if we wouldn’t touch these products today with a 10-foot fork (at least not in public), we deify them because they remind us of a simpler time. A time when artificial flavoring was a selling point and “fat-free” didn’t exist.

If you don’t believe in the processed-food-as-pop-culture-icon theory, just take a look at the Internet. There are more than 140,000 web pages devoted to Spam worship, along with some 6,000 Peeps pages, 2,300 Twinkies sites and 9,000 shrines to Jell-O. And in the non-digital world, there are cookbooks, museums and Monty Python sketches.

Yet we know tragically little about our favorite edible icons. Who among us can name the mastermind behind Hamburger Helper? Or who knows when the first TV dinner was created? Who can tell the story of how Spam got its name? To find the answers to these probing questions, we must journey back 101 years to the dawn of the processed food era.

In the beginning… there was Jell-O…

Jell-O is introduced by cough medicine manufacturer and carpenter Pearl B. Wait. Peter Cooper created the original recipe in 1845 and Wait adapted it, adding the snappy name his wife came up with. Jell-O’s secret weapon: 88 percent sugar. The world impatiently waits for the invention of Jell-O wrestling.

Kraft processed cheese is introduced. This “American” cheese is made from ground chunks o’ pasteurized cheddar or other natural cheeses that are stirred with an emulsifier and water into a smooth, homogenous fluid. Would you dare make a grilled cheese sandwich with anything else?

Reese’s Peanut Butter Cups are introduced by former Pennsylvania farmer H.B. Reese, who took a job operating one of Hershey’s dairy farms in 1917 and later started a candy company of his own.

Kool-Aid is introduced by inventor Edwin E. Perkins. In less than 10 years, his net sales shoot up to $1.5 million. Oh yeah!

Pez peppermint breath mints are introduced in Vienna. Originally intended for smokers, the mints are repackaged in a plastic dispenser in 1948. U.S. manufacture begins in 1952, and Pez is marketed as a children’s candy in a variety of fruit flavors with cartoon heads on the dispensers.

Velveeta cheese is introduced by Kraft. The cooking cheese “loaf” was originally developed in 1915 by a Phoenix cheese company chemist who was hired to duplicate Swiss gruyere processed cheese.

Twinkies are introduced by Continental Baking Company. The sponge cakes were originally sold without cream fillings for use in strawberry shortcakes. Cream filling is later added, when bakery manager James A. Dewar comes up with the idea to keep sales going after strawberry season is over.

Spam is born — hallelujah! Invented by Hormel, this ground pork-shoulder and ham product is destined to become the world’s largest selling canned meat. It was created to make use of surplus pork shoulder, mixing it with ham, salt, sugar and sodium nitrite. To distinguish Hormel’s “spiced ham” from similar products, the company held a contest to come up with a unique name. Kenneth Daigneau, brother of a Hormel executive, won the $100 prize with “Spam.”

Kraft Macaroni & Cheese Dinner is introduced by National Dairy Products after one of its St. Louis salesmen came up with the idea of mixing grated American cheese with Tenderoni macaroni. The product is advertised as one that makes a meal for four in nine minutes for 19 cents or less.

Cheez Whiz is introduced by Kraft. Originally created as an easy way to make Welsh rarebit, this stable cheese sauce comes in a jar with Worcestershire sauce, mustard flour and orange coloring added. A survey of American housewives reveals more than 1,300 possible uses for the product. Can you name three?

Swanson introduces the first TV Dinner — a combination of turkey, stuffing, gravy, peas and whipped sweet potatoes on an aluminum tray. Blame for the destruction of the family dinner is later pinned on TV-Dinner creator Betty Cronin.

Rice-A-Roni is introduced by San Francisco pasta maker Vincent DeDomenico. He was inspired to create the product after he saw his sister mixing canned chicken broth with rice and vermicelli. In 1961, Rice-A-Roni grosses $100 million in its first year of national distribution. (The company now resides in San Leandro — not San Francisco.

Cool Whip is introduced by General Foods. This whipped-cream substitute is cheaper than the real thing, keeps longer in a resealable container, requires no whipping and has fewer calories. Within three months, it’s at the top of the whipped-topping market.

Tang powdered orange drink is introduced by General Foods. The product is chosen by NASA for the galley of Gemini astronauts in space, and in July 1969, it goes to the moon with the Apollo mission. We have to hear about it in commercials for the next 10 years.

Campbell Soup Company introduces Franco-American SpaghettiOs. The canned pasta Os are created for kids who haven’t yet mastered the technique of twirling long spaghetti strands around a fork.

Pringles Potato Chips are introduced by Procter & Gamble. Made from potatoes that have been cooked, mashed, dehydrated and reconstituted into a dough, Pringles are cut into a uniform size and shape, then packaged in air-tight canisters designed to extend their shelf life. Yum!

Hamburger Helper is introduced by General Mills. Created during a meat shortage, this pasta-and-seasoning mix is intended to help housewives stretch a pound of hamburger into a tasty meal for five. Its rampant success will inspire General Foods to develop variations like Chicken Helper.

Snapple Fruit Juices are introduced in New York by Unadulterated Food Products (later named Snapple Beverage Company). The business was started by Hyman Golden and Leonard Marsh, brothers-in-law who formerly had a window washing business. Nearly 60 Snapple variations will be created in the next 20 years.

Pop Rocks are unveiled by General Foods. Ever since 1956, when company research chemist William Mitchell found a way to put carbon dioxide into a solid, General Foods searched for a way to market the invention. The popping, crackling candy turns out to be worth the wait; in only five years the company will have sold 500 million packets of Pop Rocks. (Don’t drink that Coke, Mikey!)

Ben & Jerry’s Homemade Ice Cream and Crepes opens in a former Vermont gas station. Their business will grow to compete with Haagen-Dazs.

Snapple Iced Tea is introduced. The ready-to-drink iced tea category explodes, and Snapple will add 14 new tea flavors in the next six years.

Jell-O celebrates its 100th anniversary. Champagne flavored Jell-O is introduced for the occasion. (For an upscale version of “Jell-O shots,” try making it with champagne instead of water!)

It’s comforting to know that not all that much has changed in 100 years. We began with Jell-O, and that’s where our historical journey ends. Hmm… maybe I would have been even more popular if I’d dressed up as a box of Jell-O for Halloween instead of Spam. Or maybe Spam-flavored Jell-O? Hey, there’s always next year.

For more tidbits on food history, check out The Food Chronology by James Trager (Henry Holt & Company 1995); a very useful source for this article!

– Brotherhood of the Mystical Jello: http://www.odyssee.net/~profnut/

– The Powers of Pez: http://expage.com/page/pezpowers