Veloute. Bechamel. Hollandaise. Artery busters, all of them, thick with cream and butter and dripping with calories.

Been there, eaten that.

Not so long ago, these fat-laden “mother sauces” ruled, not only in posh French restaurants but in “Continental” eateries all across America.

Sure, they’re delicious. After all, fat carries flavor.

But when was the last time you ordered one? Do you even go to those stuffy, strolling-violin-and-tuxedoed-maitre d’ French places anymore? I sure don’t, and neither do my friends — Gen Xers and Boomers alike. And how long has it been since you’ve seen one on a menu at any place fun? (Check the hip, new-wave places in your area if you’re skeptical.) And have you ever cooked one? (I haven’t since the mid-Jurassic.)

Food trends come and go, and like it or not, mother sauces are “out.” They’re culinary dinosaurs by today’s creative standards. With the 21st century just around the corner, and with “fear of fat” propaganda running rampant, today’s hot chefs are racing toward the future at warp speed.

What’s in right now is “fusion cuisine.” Dynamic and innovative, the buzzword of the Ô90s and beyond, fusine cuisine pushes the ethnic envelope to the limit by blending ingredients and techniques from all over the world.

So move over, mothers. Clear the field for chutneys, salsas, infused broths, fruit and vegetable purees, herb-and-spice vinegars and sauceless dry rubs. These high-flavor, low-or no-fat condiments from every corner of the planet are changing the face of food in restaurants and at home.

For wine lovers, though, there’s just one problem. When the benchmark cuisine was French, wine choices were a slam dunk. Beef with Burgundy, lamb with Bordeaux, oysters with Chablis and so on. Standard sauces. Yawn.

But what if you serve the beef raw, carpaccio style, with a squirt of curry-parmesan-peanut-lime puree? How about if you rub the lamb with ground Southwest spices and coffee powder, roast it, then wrap rare strips in thin pancakes, mu shu style, with chile-orange-chocolate mole sauce and green onions? And what if you stir-fry the oysters with shallots and fresh red chili pepper slices, then spike them with passionfruit-tarragon-infused rice wine vinegar?

Obviously, the old plan won’t work. Today’s sauces look and taste completely different from the old-time French mothers. And, for many of the ingredients — those from the Pacific Rim, Latin America, India and many parts of the United States, for starters — wine just isn’t part of their ethnic heritage to begin with. Since you can’t rely on your French-wine-with-French-ingredients security blanket anymore, you need to start from scratch.

So you look at basic flavors and how they work together. As good cooks know, the key to great food combinations is balance. (You already know this intuitively, and you do it automatically.) You balance hot curry with fruity chutney, fatty cheeseburgers with tangy ketchup — even salty peanut butter with sweet grape jelly. The flavors in each pair contrast with each other like yin and yang, in a harmony of opposites.

Bring beverages into the mix and it’s more of the same. Just balance what’s in the glass with what’s on the plate. Unlike the typical French mother sauce, which isn’t salty, spicy or sweet, any combination of these three elements might turn up in a modern, fusion-style condiment.

Sure, you can serve beer — there are lots of good reasons why it works. History, for one: just about all these non-European cuisines we’ve looked at (plus some European ones as well) have a beer tradition that dates back thousands of years. That means that the beers and the foods have been able to evolve side by side so they’ll taste good together.

Beyond that, most beers have enough natural sweetness to handle quite a bit of spice. This is the chutney-with-curry effect, and it also works with sangria, fruit-based Brazilian batidas, Thai-style iced tea and many other typical partners to hot cuisines. Beer’s natural sugar content (and that of these other beverages) also opens the door for the sweet foods so common in these parts of the world.

Beer tackles salt not only with its sweetness (the peanut butter and jelly effect) but with its effervescence as well. Know how beer foams up in your mouth when you bite into a pretzel or potato chip? Well, it’s the salt that brings on the bubbles. (Test if for yourself by shaking some salt into a small glass of beer or soda. Instant geyser.) This is a good thing, because the bubbles trap flavors from both the food and the drink, then release them when they burst in your mouth.

Right now, you’re probably asking yourself, “What’s the deal here. What’s all this about beer? Isn’t this supposed to be a food and wine article?

You bet. But the point is, the same reasoning that works for beer works for wine too, giving you lots of options for even the most imaginative fusion cuisine.

If the food has some hot spice, go with a wine that either has some residual sugar or at least seems to because it’s fruity. This means that if you need a white — for scallop tostadas with spicy mint-mango sauce, for instance — head toward the off-dry to moderately sweet rieslings or gewurztraminers or even chenin blancs, in the 1 percent to 5 percent residual sugar range. The sweeter the wine, the more spice it can take on. (Look out, though — really hot food is a death ray for wine. Bring on the brewski instead.)

If the dish calls for red wine — such as cinnamon-cayenne-tea-smoked duck with three-onion blueberry chutney — go with something fruity such as a gamay Beaujolais, grenache or light zinfandel. Even though they don’t actually contain much, if any, sugar, their fruit aromatics make the wine seem sweet. (Bonus points if the wine has some blueberry and cinnamon flavors — like the 1995 Rosemount Shiraz — to bring out those same ingredients in the dish.)

Inspired by classic Chinese black bean sauce preparations, this easy but impressive combo substitutes rice-shaped riso or orzo pasta for the usual steamed rice. You can find black beans packed in glass jars, often flavored with garlic or spices. Salty and strong-flavored, they take some getting used to, but as with many acquired tastes, they’re addictive.

Rub trout with soy sauce and saute in sesame oil over medium heat, until cooked through, about 3 to 5 minutes or more per side, depending on size.

Remove trout and set aside.

Cook the riso about 8 minutes.

Meanwhile, in the same pan as you cooked the trout, saute garlic in sesame oil over low-medium heat until soft and fragrant, about 5 to 7 minutes. Stir in remaining sauce ingredients and simmer 5 minutes to blend flavors.

Toss pasta with three-quarters of the sauce on a platter. Top with trout and remaining sauce. Garnish with lemon and cilantro and serve hot.

*Available at Asian groceries and some supermarkets 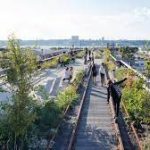