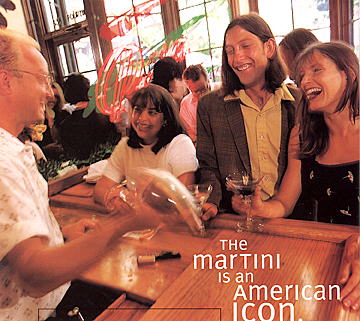 The martini is an American icon. An idea, a statement, and, to the very devoted, a lifestyle. It has been represented in film, literature and pop culture as the cocktail of choice for the cool, the suave, the connected. James Bond drank martinis. Hemingway wrote about them. Franklin Roosevelt plied Stalin with a martini at the Teheran Conference in 1943, causing Nikita Khrushchev to later declare the martini “America’s lethal weapon.” Hollywood immortalized martinis, putting them in the hands of Bogart, Joan Crawford, Sinatra. Once upon a time if you were drinking martinis, you had either arrived or were well on your way to where you were going.

The martini waned in popularity in the late 1970s. Out went the three martini lunch and other indulgences; in came a more temperant approach to life, work and drinking. Martinis fell into the same category as red meat, fur coats and cigars — decadent reflections of an older time.

But as history repeats itself, martinis are hot again. Martini bars are springing up everywhere. Young adults are pursuing the perfect martini with zeal and martini culture is again on the rise. Bartenders across the country are hailing this renaissance, declaring the martini America’s favorite cocktail. But this time around, the martini is experiencing a shakeup.

The traditional powerhouse mixture of approximately four parts gin or vodka to one part vermouth, shaken or stirred over ice, is no longer sanctified for martini drinkers. Gin is a minor player this time around. Vodka and other cordials are in. In fact, the only connection designer martinis have to the original martini “recipe” is the martini glass itself. The cocktail that launched a thousand hangovers now has many incarnations — about a thousand and one, to be exact.

At the The Purple Martini in Denver, Colorado bartender David Borun, 25, divides martini drinkers into three categories: beginner, intermediate and advanced. Beginners order martinis that are part vodka, part juice. Intermediates tend to order mixtures of liquor and cordials. The advanced martini drinker opts for the powerful wallop of a straight vodka or gin martini. “Depending on the mixture,” Borun says, “designer martinis are a way for less seasoned drinkers to have the martini experience without getting hit with straight alcohol.” Borum serves more than 80 martinis but showcases the Purple Martini; a mixture of gin or vodka and “purple magic” — a top secret mix of cordials.

According to Rob Potter, 22, owner of The Velvet Lounge in Detroit, Michigan, the martini is a statement of class and dignified position — a return to a 1940s style of sheik socializing. “When people come here they really dress up and play the part,” Potter says, “People believe martinis are classy and elegant, so they want to look and behave that way themselves.” Potter serves more than 20 different martinis on his menu. A favorite is the Orange Truffle, a mixture of orange-flavored vodka and white-chocolate liquor.

At The Martini Club in Atlanta, Georgia, bartender Todd Roseberry, 27, believes the current Martini renaissance signifies a return to quality over quantity — a move away from the excesses of the 1980s. His younger customers, the prime drinkers of designer martinis, prefer vodka based drinks, but he notes that the renewed interest in the martini is causing some customers to give gin a try. As testament, one of his wildest creations is the China Blue Martini — a combination of gin, ginger liquor and Blue Curacao, which is finished with a large hunk of crystallized ginger. “That,” says Roseberry, “is a fucked up drink!”

According to Barnaby Conrad III, author of The Martini, the origin of the martini is up for grabs. In fact, the name may not always have been martini. The martini is said to have originated in San Francisco just after the Gold Rush. But the most interesting account, vehemently put forth by citizens of Martinez, California, holds that around 1870 a miner from San Francisco stopped at a local saloon tended by French-born Julio Richelieu. The miner plunked a small sack of gold nuggets before the bartender, asked for a bottle of liquor and as a bonus received an unusual drink in a small glass with an olive dropped into it. “What is it?” asked the miner. “That,” replied Richelieu, “is a Martinez cocktail.”

Whatever the origin, San Francisco is a town where the martini holds sway — be it original or designer in style. At the Coconut Grove, a jazz supper club, bar manager Roberta Carroll, 26, says the Martini has made a strong comeback in the past year. She believes the Martini name evokes a touch of sophistication that appeals to younger adults who are sick of sports bar style drinking attitudes. “You won’t find a guy in a baseball cap ordering a martini,” Carroll says. “Young adults are revisiting an older time when things were classier. They’re taking an old idea and experiencing it in a style all their own.” Her signature martini: The Carnival — vodka, fresh lime and orange juice.

Greg Kovach, 38, owner of The Mashed Potato Club in Chicago, believes that the martini ushers a return to blatant sensuality. “The glass — the very style of drinking a martini — is very sensual.” He says, “When the martini was popular in the 1950s, everything was indulgence. People are sick of clean living and want to go crazy.” Kovach serves 25 martinis, and his menu has gotten crazier over the past year. His wildest drink is a Chocolate Martini made of white and dark chocolate liquors with a Hershey’s chocolate kiss on the bottom.

The designer martini trend has not gone unnoticed by major manufacturers of distilled spirits. Tangueray, producers of vodka, recently released Sterling Spikes, a line of flavored mixers for, you guessed it, designer cocktails. Among the flavors are pecan, tangerine and strawberry. Stoli has also jumped on the bandwagon with a line of flavored vodkas, among them orange, lemon and chili pepper.

Whatever the reason for the martini’s resurgence, there are defiantly plenty of recipes from which to choose. Create you own. Suggest one to your local mixologist. Or stop by one of the newly emerging martini bars that has probably opened in a neighborhood near you. Wherever you go and whatever choose, go nuts! The once defiant martini is open to just about anything these days. Cheers.

Orange Truffle: a mixture of orange-flavored vodka and white-chocolate liquor.

China Blue Martini: a combination of gin, ginger liquor and Blue Curacao, finished with a large hunk of crystallized ginger.

Chocolate Martini: white and dark chocolate liquors with a Hershey’s chocolate kiss on the bottom.

Sep 29, 2017Wine X
Disrobing The Monk: FrangelicoCognac: The Nac is Back!