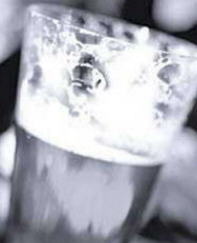 Think back. Back to the sweltering, sunny days of July and August. Back to baseball games, nineteenth holes, barbecues, outdoor sex. Those were THE best beer-drinking times, weren’t they?

When the days grow long and the sun heats up, there’s not much that cuts a raw thirst like a cold weisse or pilsner or pale ale. But those brews are only one part of the modern beer lexicon; the lighter, more refreshing side. For heavier, sweeter, fuller-bodied varieties of beer — doppelbocks, strong stouts, big brown ales and the like — a little cool and perhaps damp weather doesn’t hurt. Hell, it might even take a flake or two of snow on the ground to help coax the ultimate enjoyment out of something like a Scotch ale or Belgian-style spice beer.

And then there’s that one type of beer that requires nothing less than the absolute, frostbitten depths of winter. A beer so emphatically flavorful and formidably potent that it screams for cold weather, a fireplace, a comfy chair, a snifter and preferably a warm, sharing body beside you.

Ladies and gentlemen, I give you the barley wine.

In the Dictionary of Beer and Brewing, a barley wine’s defined as “any top-fermented beer of unusually high, wine-like alcohol content prepared from worts of 1.065 to 1.120 original gravity yielding about 12 percent alcohol by volume.” But the truth is that barley wine’s more a concept than a definition. Because how can you scientifically spell out the intense, almost masochistically satisfying hop assault of a Rogue Old Crustacean? Or the dangerous drinkability of Anchor’s Old Foghorn? Or the food-friendly complexity of Young’s Old Nick?

You can’t. Dictionary definitions may be fine for snooty chards, Bordeaux wannabes or even nasty-bitter Northwest pale ales, but they fall way short when an author is forced to use phrases like “wine-like alcohol” and “prepared from worts of 1.065 to 1.120 original gravity” to describe the majesty of a barley wine. That’s like saying Mark McGwire’s a decent hitter or Mike Myers is a little funny.

Barley wines are monsters because of their high alcohol content, that’s for sure. But malt liquors are strong, too, and I sure don’t want a 40 ounce Of Olde English when I’m relaxing by the fire with a cigar. For a barley wine to truly earn its name, it also has to show the kind of complex delicacy more often found in a beer half its strength.

And there’s the true mystery of the barley wine: how can something so intense also be so sublimely, almost impossibly smooth and complex? For the answer, I turned to the man who wrote the book on the subject, Fal Allen, co-author with Dick Cantwell of the beer style book, Barley Wine (Brewer’s Publications, 1998).

To Allen, barley wine’s great secret lies in the brewing. Likening it to the creation of a pilsner, he says that every element of the process — ingredient selection, temperature, brewing stage and, most of all, timing — must be controlled absolutely, with little or no margin for error. Without that kind of careful, methodical brewing, Allen says, you’ll end up with a big beer that drinks like a hammer upside the head rather than the sophisticated sweetheart a barley wine should be.

But gentle giant or skull-splitter, Allen says there are three qualities he and Cantwell found should be present in any barley wine. First off, he says it must be the product of a top fermentation, or in other words, an ale. Secondly, it needs to be strong, at least 8.5 percent by volume. And finally, the beer should not be perfectly opaque, lest it fall into the somewhat parallel category of imperial stout. Meet those three standards, and Fal Allen will agree you’ve brewed a barley wine.

Which may well be true, but certainly this seems to be at odds with the origins of the term as reported by Michael Jackson. In Michael Jackson’s Beer Companion, the beer bard reports that the term barley wine may first have been used during the 1800s, or even earlier, in the home breweries of England, where rural brewers would have used it to describe their strongest efforts. Simply put, whatever was strongest was the barley wine.

The first commercial application of the style, Jackson says, was probably the Bass No.1 Barley Wine, which had its name changed from a strong ale to a barley wine some time around the start of the last century. The “No.1” designation probably resulted from the beer’s being brewed from the first runnings of the malt, which yielded a high gravity, sugar-filled wort that would eventually translate into a high alcohol beer.

This separation of “first-run” and “second-run” beers wasn’t new. During the Middle Ages, the first mashing of the grain produced stronger, more durable beers to be cellared for later drinking, while the second run-through with the same grain yielded beers for more immediate consumption. In modern brewing, the sparging, or second running of the mashed grain, is typically blended with the first running to create a wort of more moderate gravity.

As the 20th century progressed, the name “barley wine” became popular among British brewers to describe their most potent beer, regardless of alcohol content or style, much in keeping with the early usage of the term. More recently, according to Allen, the style designation, or rather its awkward product-of-a-bureaucrat “barley wine style ale” derivative, arrived in the United States in 1975 with the launch of Old Foghorn by San Francisco’s Anchor Brewing Company.

As microbreweries began to spring up across North America through the 1980s, so did barley wines. First, the West Coast got going with such notables as Sierra Nevada’s Bigfoot and Bridgeport’s Old Knucklehead. Then the east caught hold of the idea and started playing catch-up with brews like Victory Brewing’s Old Horizontal, Brooklyn Brewing’s Monster and Old Dominion’s Millennium.

Along the way, barley wines have developed a strong mystique in the United States, both in and out of “beer geek” circles. And while some of that mystique may flow from the potency of the brews, and another part from their traditional seasonality, most of it stems from the fact that a well-made barley wine will challenge almost any beer in the fields of complexity, character and taste. And that, more than strength, color or fermentation, is what makes a beer truly great.