Home Come Fry With Me

Come Fry With Me 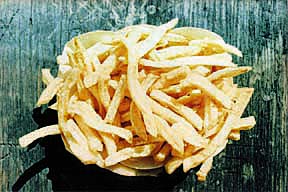 Blame it on my Michigan roots, but I grew up believing that even a grasshopper would taste pretty good if you dipped it in beer batter, deep fried it and dunked it in ranch dressing. Like most families in our neighborhood, we had our own deep fryer; the bucket-o-grease type that made the house smell like McDonald’s for days. And we weren’t afraid to use it.

After I moved to San Francisco and started eating more gourmet-type vittles, the deep fryer and I went our separate ways. But every so often a nostalgic craving for my old friend grease would pop back up to the surface like a golden-brown hushpuppy bobbing in a vat of lard. While my friends craved chocolate, I longed for French fries. Many a night, after the bars had closed and a few beers had loosened up my grease inhibitions, I found myself giving in to my weakness for fried mozzarella sticks at some 24-hour diner.

Still, I wasn’t yet ready to come out of the deep-fried closet. Here in California, land of the organic/vegetarian/vegan/macrobiotic diet, people tend to eye the onion-ring munching restaurant patron at the next table as if he were a Spotted Owl burger eater. If you don’t believe me, here’s a true story that illustrates my point.

One sunny day a few years ago, I grabbed an order of McDonald’s fries to eat outside with the turkey sandwich I’d brought for lunch. As I sat in the office courtyard, happily munching my fries, a suit-clad stranger approached me and commented, “You shouldn’t eat those, they’re fattening.” (I thought of stuffing some fries up his nose, but I didn’t want to waste them.) Okay, the guy did have a point about the fat. But I believe that if you eat a healthy diet most of the time, a little deep-fried goodness now and then ain’t gonna kill you. Especially if you fill one of the more health-conscious new deep fryers with olive oil instead of the beef fat of yesteryear.

Even chefs in some of the country’s swankiest restaurants are rediscovering the wonders of frying, serving up everything from vegetable tempura to Belgian-style fries. According to the Institute of Edible Fats and Oils (yes, there is such an organization), fat consumption is on the rise, and people are once again welcoming deep-fryers into their homes. Many have even gone so far as to buy gigantic frying contraptions for their Thanksgiving turkeys!

In tribute to the glories of deep-fried foods, I offer the following tips and suggestions. It’s time to open up the floodgates of grease and face your fear of frying.

The main advantages of the electric deep fryers of the nineties are that they have odor-reducing filters, splatter-proof lids and temperature-control dials, so you know exactly how hot your oil is. But before you rush out to Williams-Sonoma, keep in mind that this new frying technology doesn’t come cheap. Most of the new models cost between $75 and $250.

If you’re not prepared to plunk down that kind of scratch, don’t despair. Although the electric models are nice, you really don’t need a special appliance in order to deep-fry. Cast-iron pots and deep skillets are great for frying, as are woks and Dutch ovens.

Whatever frying vessel you choose, make sure it holds enough oil so the food doesn’t touch the bottom of the pan. This will prevent your morsels from absorbing too much oil.

Back in the glorious eighties, you didn’t have to think about which type of oil to load into the deep-fryer. You just dumped in the Wesson and went off to watch The Facts of Life while your little brother peeled the potatoes. Today, it’s not so simple. Should you use olive oil? Vegetable oil? Canola oil? Cottonseed oil? Grapeseed oil? Motor oil?

A few things to consider when choosing a frying oil are flavor, odor and saturated fat.

If flavorful deep-fried food with a crispy crust is more important to you than your arteries, you might want to go with lard or vegetable shortening. Shortening also has the advantage of leaving very little odor behind after frying.

More health-conscious folks may want to use vegetable, cottonseed or canola oil. Vegetable and cottonseed oils are healthier than lard or shortening, have light, clean flavors and won’t make your house smell excessively oily. Olive oil has the advantage of raising the body’s level of “good” cholesterol, but its intense flavor can sometimes be overwhelming in fried foods. Peanut oil is another flavorful option and is often favored by Asian cooks.

Sesame oil and butter are not recommended for frying, due to their low smoking points. The smoking point of an oil refers to the temperature at which it begins to break down and acquire an off taste. The oil may also catch fire at this point (which would be bad).

GENERAL TIPS FOR THE FEARLESS FRYER

Don’t Be Stingy with the Oil: For deep-frying, the pan should be one-third to one-half full. Use enough oil so the food will float in it, but not so much that the oil spills out of the pan when food is added.

Some Like it Hot: The oil’s temperature is very important in frying. If it’s too cool, the food will taste greasy. Too hot… the food will burn. Experts at Crisco (go to http://www.criscokitchen.com) recommend frying most foods at 375 degrees Fahrenheit. If you don’t have a temperature-controlled fryer, use a frying thermometer. And if you’re lacking a thermometer, toss a square inch of bread into the oil: it’ll take one minute to brown at 375 degrees Fahrenheit. (If you don’t have any bread, I can’t help you!)

Better With Batter: Coating your food with batter or bread crumbs is essential — and not only for the deliciously crispy crust it produces! Hot oil can damage food in its naked state, leaving it with a hard skin and dried-out interior. Batter and bread crumbs help seal in the food’s flavor and moisture. Make sure the food is perfectly dry before dipping it in its protective coating; excess moisture will make the oil splatter.

Elbow Room: Even if you’ve got the deluxe Fry Daddy (with the cooking basket big enough to hold a cat), resist the temptation to put too much food into the appliance at once. Overcrowding will lower the oil temperature, leaving you with flaccid, soggy food. Give the food plenty of space in the fryer and it will absorb less oil, resulting in a crispier crust.

Serving Time: After rescuing your food from the fryer, drain it on a layer of paper towel to soak up the excess grease. Fried foods are best served immediately, but if you have to wait, arrange the food in a single layer on a cookie sheet and pop it into a 200 degree Fahrenheit oven until you’re ready.

For most people, beer is the beverage of choice with fried foods. Of course that doesn’t mean you can’t enjoy them with a tasty glass of vino instead! For your next fry fest, try a crisp and citrusy white wine, like a sauvignon blanc or a deliciously fruity red such as zinfandel.

Armed with these handy tips (and a bottle of ranch dressing), you can now go forth and embrace the deep-fryer as a long-lost friend, defy the tofu Nazis and fry with confidence.

When I invited my friends over to help me deep-fry a bunch of weird food items, I had no idea I’d have so many takers. Even the most fitness-obsessed freaks wanted in.

Luckily, I was able to get my greasy mitts on one of those new-fangled deep fryers for the occasion: Oster’s FryRight Deep Fryer (retailing for $75). This thing looked more like something out the Jetsons — we’re talkin’ sleek white plastic body, built-in timer, filter system and locking lid, baby!

Determined to push their notions of frying to the outer limits, my friends showed up with glazed looks of anticipation on their faces, clutching mysterious bags of chow. Following are the results of our experiments.

‘Nanabutter Sandwich (aka: The Elvis Special): This delicacy was constructed by first toasting white bread, spreading peanut butter on both slices and layering thin slices of banana in the middle. The sandwich was then brushed with a layer of Bisquick batter and deep fried. The result? A tad greasy, but still pretty damn tasty! Think of a deep-fried Nutter Butter.

Marshmallows: A bad idea. The marshmallows merely melted into the hot oil, making a dang mess of the fryer basket.

Mini-Snickers Bars: This sounded much better than it actually was. Even when coated with a protective layer of batter, the Snickers bars became encrusted with grease. The texture was both gluey and chalky. Pretty awful.

Sushi: I just couldn’t resist the idea of deep-frying sushi because a) the whole point is for it to be raw, and b) the other whole point is for it to be healthy. Pieces of salmon and tuna sushi were dipped in beer batter, little beds of rice and all and fried to a golden brown. Surprisingly, they maintained their perfect sushi shapes and tasted pretty much like the best fish sticks we ever had. The fish was still rare and moist inside, as was the rice. All it needed was a little soy dipping sauce!

Cricket Fritters: I wish I was kiddin’ about this one. Yes, I do have a friend twisted enough to buy live crickets at a pet store, subject them to a slow death in the freezer (it takes about 15 minutes), cut off their little cricket heads and deep-fry their carcasses in beer batter. Upon eating a cricket fritter, he proclaimed that they were “not bad.” Another friend said they didn’t taste like anything but the thought of eating a cricket…

If you’re wondering how the fryer held up to all this abuse, I’m happy to report it’s still kickin’ (unlike certain crickets I used to know). The lid kept the oil from spattering all over the kitchen and stankin’ up the joint too badly. The next day, the smell was practically gone — not bad considering I had the fryer going for three solid hours.

BOOKS TO HELP YOU EXPAND YOUR FRYING HORIZONS

If you’ve got a fryer, this book will help you make the most of it. After a primer on the subtleties of frying, the book offers down-home recipes for popcorn shrimp, chicken-fried steak and chocolate cake doughnuts.

If you love both fried foods and your arteries, this book will show you how to fry the healthy way, using clean hot oil for practically grease-free results. Includes 125 easy recipes, from old standards to expected treats.

Mar 28, 2019Wine X
Roller Derby Gets Back On TrackArt by Kevin Tracy