Home What We’re Listening To The Cigar & Beer Experience 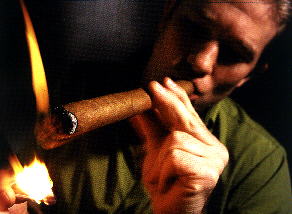 With celebrities, models and movers-and-shakers clutching fine stogies everywhere, the cigar experience is opening up a plethora of new possibilities. Across America, cigar smoking is being reshaped, redefined and reinvented. Old perceptions have been removed, “fat cat” stereotypes have been stamped out, and cigars are definitely in.

So what’s a beer lover to do? Get in on the game. The cigar’s recent explosion in popularity has challenged the idea that cigar-to-beverage pairings should consist solely of cognacs, ports and whiskeys. Once off limits, beer is now seen as an ideal accompaniment to cigars.

The beer renaissance of the last decade has brought hundreds of small breweries onto the scene. Craft beers provide an exciting array of choices for cigar pairing. Today’s craft beers are loaded with flavor and can hold their own against a mouthful of smoke. Like cigars, these full-bodied beers possess incredible variations in style, creating endless possibilities for cigar pairings.

Beer is made from four essential ingredients: water, fermentable sugars (traditionally malted barley), hops and yeast. These ingredients are processed and combined according to a recipe. Given the right conditions, the yeast will convert (ferment) the malt to alcohol, carbon dioxide and the tastes we associate with beer. The beer is then bottled and aged anywhere from a week to three months.

Malt gives beer its overall style, body, color and intensity. The first step for successfully pairing beer and cigars calls for balancing a beer’s “malty” characteristics with the richness, sweetness, intensity and overall character of the cigar.

Beer’s subtler flavors come from hops (which impart a bitter, biting quality), and the yeast used for fermentation (which can, depending on the brew, lend a varying degree of “bready” or “earthy” flavors). Hops and yeast provide a flavorful overlay to a brew’s malty core and add to the creative possibilities for pairing with cigars.

The three primary components that create the overall cigar smoking experience are the size of the cigar, the wrapper used and the tobacco rolled within it. In our search for some definitions and descriptions, we found the following valuable information in Richard Hacker’s “The Ultimate Cigar Book.”

Cigars come in lengths of typically 4 1/2 to 7 inches. Widths, or ring gauges, also vary (each ring is equivalent to 1/64 of an inch.) The smaller the ring gauge, the smaller the diameter. Cigars with a smaller ring gauge provide a more intense smoke. Conversely, cigars with larger ring gauges produce smoke that is fuller in flavor.

When pairing cigars with beer, a general rule applies: the less intense or more delicate the beer, the smaller the cigar should be. Because a small ring gauge cigar produces a cooler smoke it will pair better with a wheat beer than with a stout. A short, fat robusto will, in most cases, pair better with flavorful beers like porter, stout and dark ale.

Like ring gauge, wrapper color will pretty much determine the strength or intensity of a cigar and provides the best clues for the perfect cigar-to-beer match. The lighter the wrapper, the lighter the brew, and so on.

The attributes of filler tobaccos are harder to pin down. Tremendous variations exist between growing regions and styles of curing and aging. These descriptions provide an overview: Dominican (generally a milder tobacco); Honduran (slightly more full-bodied or spicy than Dominican); Havana (medium-to-full- bodied); Jamaica (mild, lighter than Dominican); Maduro (varies from sweet and mild to powerfully rich and heavy — very often having chocolate and coffee flavors).

Matching the powerful flavors of beer and cigars means seeking harmony or a “like-with-like” relationship between the intense flavors of smoke, malt and hops competing for your attention. Neither the cigar nor the beer should overpower the other.

Steve Bown, cigar specialist at Southern Wine & Spirits, and Jay R. Brooks, beer buyer at Beverages & More!, helped come up with these pairing suggestions. Tasting recommendations are always subjective, so use these as a starting point, and experiment with your own tastes in mind.

You don’t want to overpower the light, fruity flavors of wheat beer. Because wheat beers are meant to be light and refreshing, your cigar should not be overbearing. The Don Tomas “Natural Wrap” Series will compliment a Pyramid Hefeweizen or Grant’s Weiss Beer. Astral Series, a little fuller and more complex cigar, will stand up to a tangy German wheat like Tuchen. Cigars with Connecticut shade wrappers, such as Macanudo Jamaican, Don Leo or Napa Cigar Company Dominican will pair nicely with Pilsner Urquell, Widmer Vienna Lager or Sam Adams Golden Pilsner.

The variety of fruit beers — from wheats to ales — make cigar matching very subjective. Let the fruit shine through without covering it up. A lighter smoke, such as a Claro or Colorado wrapped cigar, would be best with Pyramid’s Apricot Ale or Widmer’s Widberry. Experiment with size and lighter intensity wrappers.

Ale encompasses a wide range of flavor and styles. For sweeter amber ales, try a cigar that has some spice and body, such as the Hamilton Series “George Line” from the Dominican Republic with a spicy Indonesian wrapper. For bitter ales, like Sierra Nevada Pale Ale or Redhook ESB, try something from the Don Tomas “International Line” — the bitter hop flavors will work with the spicy Honduran tobacco in the cigar. Astral and La Pantera cigars will also pair nicely.

These brews are full-bodied and powerful — as your cigar should be. Scotch ales have a high alcohol content, which tames the bitterness factor. Your cigar should be able to hold up to the beer but without overpowering its subtleties. A Dominican with a Sumatra wrapper, such as Indian Classics or Partagas, should fit the bill. Pour a Grants Scottish Ale, or, from Scotland, try McEwans or Belhaven Scottish Ales.

A heavy, black Maduro cigar in one hand and a black-as-night beer in the other is about as much flavor as a human can handle. A Maduro is the hands-down choice for darker beers. There’s tremendous variation among porters and stouts and among Maduros themselves. For porters, like Sierra Nevada Porter, Great Divide St. Brigid’s Porter or Portland Haystack Black, try Don Tomas or Petreus Maduros. Try pairing sweeter stouts, such as Mackeson, Sam Smith’s Imperial Stout or Roque Shakespeare Stout, with a Tamboril Maduro. For dry stouts, like Guinness, Murphy’s Irish Dry or Anderson Valley Barney Flats Oatmeal Stout, try Don Manolo’s Colorado Maduro.

The Segregation of Wine
1,176 views