Home Catcher in the Rye

Catcher in the Rye 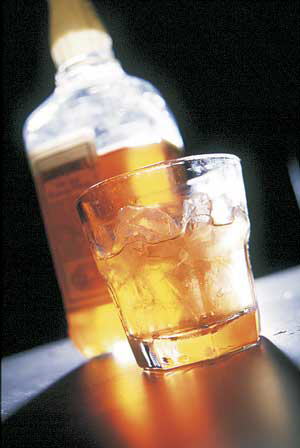 As if things weren’t bad enough for George Washington’s troops in the winter of 1777. Hunkered down at Valley Forge, after getting their rebel asses kicked by the British, they were beaten up, hungry and cold. Then their whiskey rations ran out.

So the soldiers, knowing that every farm in those days had a home still, trudged from door to door begging for spirits. And what do you suppose the patriots said? It wasn’t, “Gimme some hooch!” The settlers in that territory were mostly Germans. So when the door opened, the ragtag rebels were asking, “Haben Sie Schnapps?”

That’s right, schnapps. But they weren’t talking about the peppermint swill you chugged in high school. Schnapps meant whiskey. And back then, in those parts, whiskey meant rye.

Nowadays, the only thing most people know about rye is it’s the stuff them good ol’ boys were drinkin’ in “American Pie.” They’re missing out on the last great undiscovered American booze. Straight rye (and I don’t mean a Canadian blend) has an unmistakably tangy, peppery bravado – without the sweetness of bourbon or the smokiness of Scotch.

Rye is the whiskey that won the Wild West, and until Prohibition it ruled the East Coast. There may still be a few bars in Baltimore where old men with faded USMC tattoos drink rye and talk about how the country’s gone to hell since Ike was president. But like the 65 rye distilleries that once dotted Pennsylvania and Maryland, they’re mostly history. Such classic cocktails as the Manhattan and New Orleans’ Sazerac are supposed to be made with rye, but if you’ve been served either one in the past 20 years, the bartender probably used bourbon.

It’s easy to see why. Rye’s so unpopular that it’s all but impossible to find in even the best liquor stores. And when you find a bottle, it’s usually Old Overholt – a venerable old brand. But if that were the only one on the market, rye’s chances for a comeback would be forever doomed. Much better to try Jim Beam’s yellow-labeled straight rye. It’s light, pleasantly fruity and fine for mixing with ginger ale – which is how Philip Marlowe, the tough-talking detective in Raymond Chandler novels, used to drink it.

The only other mass-produced (and I use the term loosely) rye is by Wild Turkey. It’s also the best. At 101 proof, it’s dark, leathery and full of bite. But rye just isn’t a mass market item anymore. All but one of the companies making rye today are Kentucky distillers that turn out bourbon for 200 days a year and rye for three or four.

The good news is that a handful of companies is marketing aged, super-premium ryes that are excellent, distinctive sipping whiskies.

Last year, plant managers at the Buffalo Trace distillery in Frankfort, Kentucky, happened upon a cache of barrels marked “rye.” Turns out the stuff had been sitting there some 17 years. Fortunately, they’re releasing it this fall as an 18-year-old that’s amazingly smooth and complex, with hints of burnt orange, mint and ginger in the nose, and lots of nuts and toasted marshmallow on the palate. Unfortunately, they’re calling it Sazerac – which is likely to make some people think this delicate gem is meant for mixing, which would be an insult to the whiskey.

Third-generation Kentucky whiskey man Julian Van Winkle bottles a line of outstanding aged bourbons. After a request from a Japanese customer he tracked down a supply of rye that he bottles at 12 and 13 years old. The extra year in oak makes a big difference – the orange and plum in the 12-year-old gets even sweeter, with vanilla and a little clove coming out in the older version.

Another entry in the market is bottled under the brand Hirsch. Preiss Imports of California, which owns the name, wanted to add a rye to its roster of specialty bourbons. So they contacted Van Winkle for help. Compare Van Winkle’s and Hirsch’s 13-year-olds and the bottles won’t be the only thing suspiciously similar. They are, in fact, the same whiskey, both bottled by Van Winkle but selected from different barrels.

Fritz Maytag, who blazed a trail in the microbrew world with his Anchor Steam beers, is at it again. This time, he’s making the world’s only 100 percent single malt rye whiskey, called Old Potrero. Why? Because it’s unquestionably delicious, with butterscotch, peppermint, walnuts and sugar cane all present in the taste. And because it’s authentic. Back in George Washington’s day, they didn’t blend the rye grain with corn and barley, as they do today.

If Maytag’s Old Potrero is anything like what Washington’s troops were drinking, tell me where to enlist.