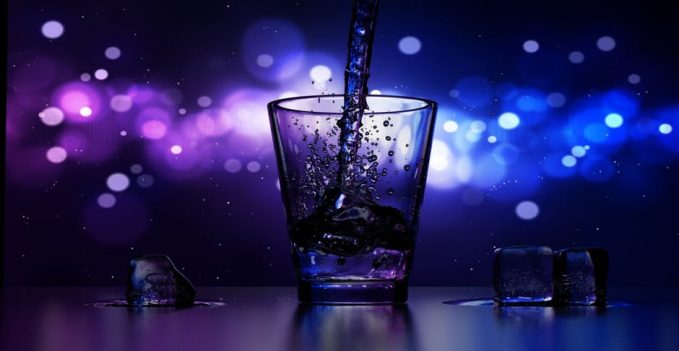 by Lora White
It’s a perfect day at the island bar of your imagination. The air is fragrant with hibiscus and gardenias, warm enough for your casual uniform of huraches and a light Hawaiian shirt. A refreshing summer rain plinks occasionally on the thatched roof of the hut. Just outside, there’s laughter at the beach luau, where a roast pig turns over an open spit and an eternally 20-something Elvis strums a ukulele for girls clad in bikinis and clam-diggers. You’ll be joining them soon, wandering across the sun-warmed sand in pursuit of the mingled smells of abalone and shrimp and juicy pineapple. But not before you lift another exotic cocktail from the tray of a passing grass-skirted waitress. Is it a Chi-Chi? A Zombie? A Blue Hawaiian? Who cares. You settle back with your tiki glass, add another paper umbrella to your collection, and take a long, wicked sip of paradise.If this sounds like the lounge experience of your dreams, you aren’t alone, mainlander. The lure of the tropics has been with us since European explorers first set sail in search of paradise (or at least fame and treasure). Island fever hit the United States big after World War II, when the returning G.I.s brought back a taste for the lifestyles and tastes of the South Pacific. At the height of the Polynesian craze in the 1950s, any number of cocktail lounges had an “island” theme, including the Fairmont Hotel’s famed Tonga Room, whose indoor, bar-side raining lagoon was copied by establishments as far away as Ireland. Newlyweds flocked to Tahiti for honeymoons, men in Des Moines sported island-print shirts, and housewives started cooking luau for family barbecues. And then, like a fleeting island rain, the trend was swept out to sea. In the seventies, eighties and nineties, when flash and decadence ruled the scene, umbrella drinks folded up in favor of wine spritzers and Martinis. The tiki-lounge seemed gone for good. But as the recent resurgence of tropical cocktails proves, the classic trend never left us; it was just taking time out in the hammock.

To some extent, tropical cocktails have always had a place on bar menus, especially among the cruise-and-hotel-bar crowd, though their flamboyance toned down considerably after the boom years of the fifties and sixties. While the tiki-lounge drinks of the past were adorned with umbrellas, skillfully carved fruits, coconut shavings, dry ice or any combination of these, until quite recently drinkers were lucky to get a soggy cherry in their Pina Colada.

Happily, a new crop of tropical lounges is set to bring back the kitsch and froo-froo to island cocktails. Some bars and clubs have begun hosting occasional “Tiki Nights,” and others have gone island loco, offering luau menus, Polynesian music, island decor and, of course, tropical drinks galore. Patrons can sample everything from a classic Mai Tai to a Jolly Mon, along with pu-pu platters laden with conch fritters, fried shrimp and barbecued spare ribs. Whether you want a simple cocktail garnished with a watermelon wedge or a concoction that smokes and bubbles like a volcano, you won’t have to travel to Hawaii to find it.

While island cocktails look pretty and harmless, most pack quite an alcoholic punch. Drinks like Blue Hawaiians, Coral Reefs and Hurricanes all get their luscious taste from light and dark rums. When mixed with such ingredients as coconut milk and citrus juices, rum goes down easy, but be careful — too many too fast can leave you face-down in the sand. Concoctions like a Gilligan’s Island, laden with vodka and peach schnapps combined with orange and cranberry juices, also have tastes that deceive their truly potent nature. In other words, don’t let those flower garnishes and coconut shell glasses fool you: tropical cocktails mean serious drinking.

With warm summer nights approaching, island beverages will also be making a comeback at the season’s barbecues and poolside parties. Whipping up a steady stream of blender drinks for a crowd can keep the host or hostess stuck in the kitchen and away from the festivities, so give tropical punches a whirl as a delicious serve-yourself alternative. Large punch bowls or trash cans filled with Bamboo Cocktails or Captain Caribbean punch and garnished with fruit slices, ice rings or floating flowers are eye-catching and easy to prepare. With rum, fruit juices and club soda on hand, you can keep the party surfin’ with any number of hurricane-in-your-mouth punches.

If you find yourself longing for tropical refreshment on a quiet night at home and don’t feel up to mixing your own island concoction, there are several premixed varieties on most supermarket shelves. Bay Brand’s Refreshing Tropical Cocktails are a good choice, as are the ever-popular Club line of drinks. Boone’s and Bacardi Breezers will also do the trick. You won’t get the special effects of a lounge-made cocktail, but if you string some tiki lights around the living room and spin some Don Ho records, you might be able to fake the island atmosphere.

So if you still think Martinis are the height of hip, think again. Shuck those wingtips and ties and get ready for some island hopping. Hit your local tiki-lounge, sip a couple of Wavecutters and you’ll be feeling the sand between your toes in no time.