You Can Get It Eating Smoked Salmon 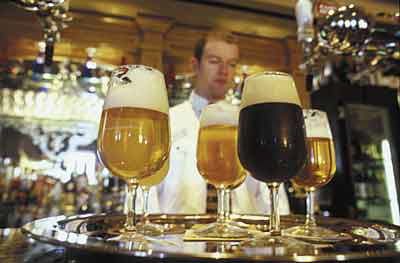 In the old days, you stuck by a brand of beer like you did your old man’s football team. But these days, everyone’s dropping the local product in flavour of the imported Euro brands … or are they? Cameron Noakes looks at changes in beer drinking patterns and at a new concept known as beer theatre.

In a Paddington pub, 15 years ago, Frank, Jack and Mick marched in and Mick asked, “Beers all round, boys?” The lads nodded, Mick walked to the bar, Frank lit a fag and Jack started talking about the football.

A minute later Mick returned empty handed. “Do you want something spicy, fruity or a grassy thing with floral tones?” The piano player stopped.

“Usual” says Frank, aware that everyone knows he only drinks Stella Artois with Hoegaarden as the occasional exception.

This is a story about beer and if you call VB or Four X mother’s milk, it’s best you turn the page now because the rest of this article is going to upset you. But hear what I’m saying, there’s a beer revolution going on.

Last week, Mick, Jack and Frank marched into the Young & Jackson Hotel in Melbourne’s heart and Mick asked “Beers all round, boys?” The lads nodded and Mick soon returned with a beer-tasting tray.

And this, my friends, is a revolution. It doesn’t sound like much – beer-tasting trays have been sold in various countries for years. But for Mick, Jack and Frank to buy a beer tray in one of Australia’s oldest pubs speaks volumes.

Stewart Wheeler, Y&J’s manager, explains there is more to drinking beer these days than banging down a pot of Vic. “One of the words we use a lot when we’re talking about beer – especially when we’re training the staff – is theatre,” says Wheeler. “The whole entertainment experience at the pub is more than just the bartender taking cash and pouring beer.

“We say the bar is the stage, the experience is the theatre, the customer is the audience and the products are the heroes.  What we are trying to establish here is a wine treatment of beer products. So we offer a free tasting if you want to sip something before you buy or alternatively you can purchase the beer-tasting tray and you get tasting notes and the whole bit. The intention is to show there is a lot more to beer than getting drunk on it. Upstairs in the brasserie, for instance, we have a beer suggestion for most of the dishes.”

Chuck Hahn – the same Chuck who built the Hahn brewery in 1988 and is now making the James Squire brands – knows a thing or two about brewing beer and is a close observer of Australia’s beer consumption. He believes Australian beer heads “are starting to realise there is more to just drinking beer for refreshment and trying to get lucky”.

“After the recession the premium beer sector actually dropped back down to about 2.5 to 3 percent (of total beer sales in Australia),” Chuck says. “You compare that to Germany or in the States and the premium beer sector is about 10 to 12 percent. But what’s happened in the last five years (in Australia) is it’s doubled, it’s about six percent now and it’s till increasing and a lot more imports are coming in and we’re seeing some small brewers coming up again.

“I think it’s more a development of a drinking culture whereas in the past beer has been the culture.

“When I first came to Australia from the States I remember shouts of five or six to ten people that would go all night. That was very commonplace but now people don’t feel as obligated to drink so much.

“I think the drink-driving legislation was a rude awakening for a lot of people. Australia was third in the world in 1975 (per capita) in beer consumption and now it’s barely 93 or 94.”

So what does all this mean for CUB and Victoria Bitter? CUB spokesman David Park says as long as people drink beer CUB is happy.

“If you’re asking, ‘Are the days of the VB numbered?’ the answer is no.”

“The biggest mainstream beer in Queensland is not Four X Bitter, it’s VB.”

Meanwhile, back at Y&Js with all its fancy sprays and fancy trays, Stewart Wheeler confesses: “At the end of the day we’re still selling 80 kegs of VB a week.”

Which leads me back to Mick, Jack and Frank who have just walked into a bar in Brisbane. “Beers all round, boys?” It’s a rhetorical question. Minutes later Mick returns with three bottles of VB. Frank lights a fag and Jack has a sip and mumbles “Mother’s milk, my friends, mother’s milk.”