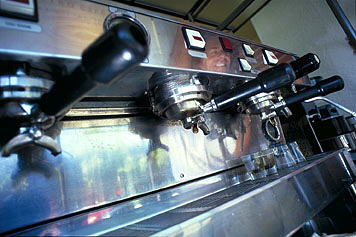 The bittersweet irony is that the same commodities that were eagerly consumed in the cafés and coffeehouses also fanned the flames of dissent. Coffee, sugar and tobacco, which enslaved the New World (and a few million Africans), became, through the institution of the café, elixirs of social liberation.By 1900, literally thousands of cafés sprung up in practically every city in Europe and became the focal points of political and social life. There were coffeehouses for writers, artists, musicians and even scientists. Known as “Penny Universities,” cafés also provided a real education for generations bred on caffeine and the infinite diversity of coffeehouse life. Offering cultural exchange that blurred class divisions and barred conformity, cafés seemed the midwives of modernism and upheld certain ideals of Enlightenment.

Only in the last few decades did the number of cafés decline due to a ruinous combo of urban economics and social agoraphobia. Fortunately, the nineties have seen a turn-around. Cafés are blossoming once again, and although they might be of a decidedly different form — and run with an eye to efficiency and business — the true “bohemian” cafe, where an educated person may ponder, work, study or just sip a tall mocha, can still be found if searched for long enough.

Where was Trotsky when the October Revolution was declared? In a café, of course.For those of you still unaffected by the recent resurgence of cafés or coffeehouses, here’s a quick debriefing:

The ‘café’ – a public institution that epitomizes the cosmopolitan pleasures of urban life – is a fairly recent invention closely connected with the development of both social and artistic movements. Although very much related to, but distinctly different from, taverns and restaurants, cafés spread throughout Europe in the latter part of the 17th century, during a period of intense social and economic upheaval.

In England and Holland (in that fabulous sin city known as Amsterdam), cafés became the focal point of the new and burgeoning economies. They served as adjuncts to the developing stock exchanges and as meeting places for a new breed of savvy businessman. In Paris, cafés emerged as the birthplace of artistic and literary movements. In the Austro-Hungarian Empire, they were the center of cultural life as well as the hatching-ground of many Machiavellian-type plots.

The origin of cafés was also bound to another fairly recent phenomenon – coffee. A product of the Moslem world, this “new” commodity, along with sugar and tobacco, became the basis for plantation economies and created a type of café triumvirate, so to speak. Addictive (and isn’t everything that’s good?) to one degree or another, these three products absolutely powered the industrial revolution, stimulating a more efficient labor force and simultaneously creating cold hard capital for industrial might.