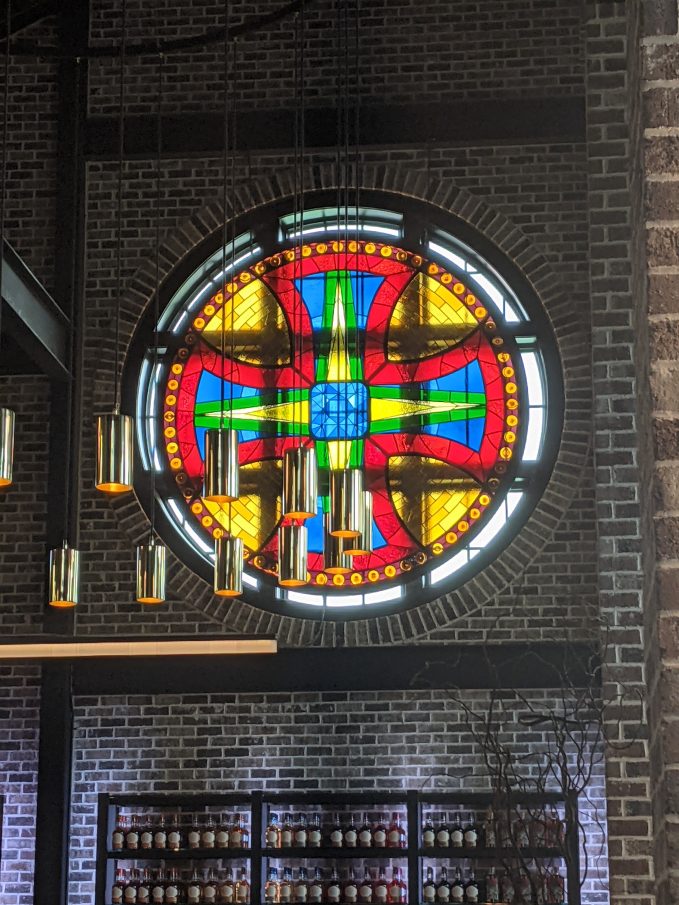 Somewhere along the backroads into Bluffton, SC, I came across a billboard boldly stating, “General Sherman was a terrorist and arsonist!” I was deep in the low country where tempers have not wavered in hopes that the South would rise again. So it seemed appropriate that my destination was Burnt Church Distillery, a play on the local history of General Sherman having burned all but two churches down the historic road that led through Bluffton, SC.  Lets have some high times in low country…. 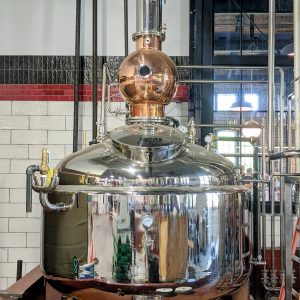 While the distillery itself was not a phoenix from the ashes, it was a spectacular homage to the past and local history. It is on par with some of the greatest tasting rooms in Napa Valley. You would be hard-pressed to find an uncomfortable seat in the house, and lord knows that this would be my go-to date night place if I lived locally.

Tasting room manager George Davidson oozes good old boy charm. I’m immediately comfortable knowing that this man is no stranger to his bourbons and whiskeys and won’t hesitate to share his thoughts.

We spend a few minutes taking in the “church,” and he guides me to the “Secession Oak;” a massive, 5000lb pound limb from the original oak where future Confederate revolutionaries met under to discuss seceding from the Union. Once again, a gentle reminder that we’re in the heart of the South.

We’re led to the VIP section in comfortable leather recliners meant to entice you into settling in for a while, which is exactly what we did as soon as I was presented with a flight of their current offerings (per George’s direction) to sample. 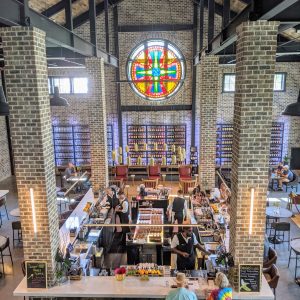 The distillery itself is in the final stages of full operation. Currently, distilling takes place in a partnership in Kentucky, with everything else- aging, bottling, and labeling taking place on-premise. So getting to the point of having an actual tasting room and selling full-size bottles was no less a task than trying to halt Sherman’s march.

In the not too distant South Carolina past, any establishment selling liquor was required to sell “nips.” Yes, those miniature-sized bottles you snuck into movie theaters before they got wise and charged a ridiculous mark up on poorly made cocktails and insipid Cupcake chardonnay. With significant encouragement and perhaps the occasional paper bag full of cash, the law was lifted, and a modern variation on Prohibition was repealed.

However, the idea of a tasting room, a distillery no less, did not sit well with the well-heeled and gentle sensibilities of the powers that be. Cooler heads prevailed as the birth of “Old Town” Bluffton came about, and the natural proclivity for a revenue-generating tourist outpost materialized. 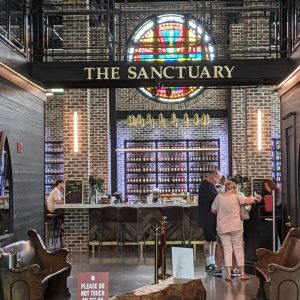 It was also more than that. Burnt Church Distillery won the crowd through the meticulous reliance on utilizing local artisans every time possible. Portions of sales revenues are directed towards a local charity that ensures the benefits stay within the community. Everybody wins.

One other thing these folks know really well- catering to their audience. In addition to bourbons and whiskeys, they also make vodka and some pretty interesting flavored gins, including cantaloupe, cucumber/black pepper, and grapefruit/orange. They also make interesting non-alcoholic spirits full of botanicals and extracts. To be honest, I don’t know HOW interesting they are because I don’t go into a steak house and order fish, nor do I go into a distillery and drink non-alcoholic beverages.

The bourbon and whiskey lineup was rather eclectic. Of note was the Bluffton Whiskey, which features a unique mash bill offering a heavy dose of the local Carolina gold rice. It’s best described as the bastard child of a sake and a traditional bourbon, but I’ll be damned if it doesn’t work. Such a unique flavor profile, it would be an excellent alternative for any meal when sake is offered. 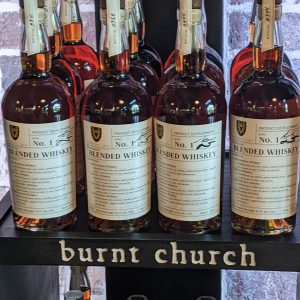 The Palmer’s Stretch Rye didn’t beat you over the head with an out-of-control black pepper component like many on the market do. The spice box profile was actually quite pleasant, and it stood on its own as a sipping rye.

The one that really knocked me out was their special blended whiskey, “The One.” A one-of-a-kind blend of their bourbon, rice, and rye whiskeys. The bottles are numbered and hand-signed and demand a place among some of the best American blended whiskeys on the market. The initial nose gave off a hint of chocolate milk but really revealed itself to be rather complex upon tasting. And zero back-end heat. This is exactly why the leather recliners were put in place. So sip, enjoy, and contemplate.

Prior to enjoying a stellar campfire inspired old fashioned by one of the team behind the tasting room bar (who make all of their own syrups and bitters in-house), I took a trip to the men’s room. There I found a spa-like space as I peed at the Pee Wall- a floor-to-ceiling stone flowing water structure that was one part urinal and one part waterfall that would have been at home in a serenity garden. I am quite certain the other patrons utilizing the wall did not take kindly to my lingering in a state of Zen, and less so when I opted to take a photo of it. 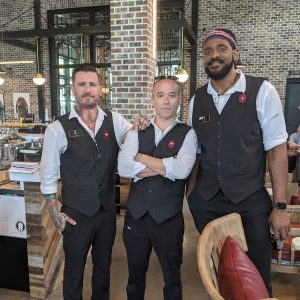 Ever the good ole boy, George offered me a sample of one of their versions of flavored moonshine before my old-fashioned. Because it’s the South, it would be heresy if they didn’t make moonshine. He offered the Sin Eater, a clever, more grown-up version of Fireball, and ever playing to the crowds, all of the moonshines are “manageable,” i.e., you won’t go blind drinking them, and they have some great flavors.

My mind drifted off to thoughts of barbecue and slowly smoked meats as I sat in my plush seat, enjoying the smells and tastes of a campfire in a well-crafted cocktail.

Burnt Church Distillery is on its way to delivering a great taste of the low country and an excellent heaping of southern charm.