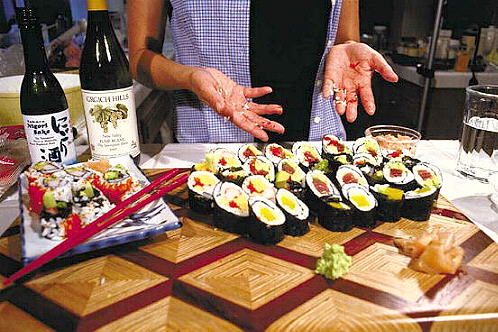 My name is Tina, and I’m a sushiholic.

My addiction started innocently enough, through a college job waiting tables at a Japanese restaurant. That’s when I

had my first sushi buzz. I’m not sure if it was the gorgeous presentation, the sinus-clearing rush of the green horseradish or the sublime flavor of raw fish that sucked me in. Whatever it was, I was hooked.

My obsession didn’t stop with this one restaurant. I worked at three more sushi bars after college, while in pursuit of the perfect fix. But even that wasn’t enough. I learned how to make my own sushi with the guidance of a expert like Jimmy John Shark, ending my dependence on Japanese restaurant chefs forever!

market in San Francisco. Finding a recipe for sushi rice was a bit challenging, but I eventually managed to dig one up in a Japanese cookbook. Over the next year or so I tried making sushi exactly twice — with disastrous results. Suffice it to say, my sushi wouldn’t have looked much different if I’d made it with my foot.

I decided it was time for professional help. Not in the form of a shrink, but rather a two-hour sushi workshop offered by a nearby cooking school.

I happily forked over 70 bucks for the class, certain I’d learn some secret technique that would transform my

homemade sushi creations from frumpy fish wads to exquisite culinary works of art. The workshop was held in a smallish room above an upscale kitchen store, outfitted with professional cooking equipment and mirrors above the food prep counter for easy viewing. I took a seat at one of the large round tables scattered around the room and eyed the magical sushi implements set on a plastic cafeteria lunch tray before me: a bamboo rolling mat, sheets of dried seaweed of various sizes, and plastic ramekins filled with crab and pickled ginger. In the center of the table, a communal plate of sliced avocados, Japanese radishes and cucumbers beckoned. Soon, I’d be able to make sushi at home whenever the urge struck — I could sit in front of the TV nightly, munching tekka maki like it was popcorn!

assembly. After about an hour of cooking-show-style demonstration, she set a plate of raw fish and a large bowl of rice on each table. Elbow to elbow with my fellow students, I set to work trying to emulate the beautifully prepared sushi on the sample dish at the front of the room.

Despite my best artistic efforts, my sushi came out looking like some kid had run it over with his bike. The rolls

practically exploded as I cut them; my unagi lay flacidly on its bed of rice like a lopsided toupee; my futomaki spilled its guts onto the table like a disgraced samurai committing hara kiri.

After trying in vain to detach the sticky sushi rice from my forearms, shoulders and face, I surveyed the room. To my great relief I was not the only aspiring home sushi chef with mutilated maguro. Some people’s sushi looked even worse than mine!

SO WHERE DID WE GO WRONG?

Leafing through my workshop handout sheets I found the answer: 10 years. In Japan, that’s how long an apprentice

sushi master is required to train before becoming a full-fledged chef. This information made me realize that expecting to make beautiful California rolls after a two-hour sushi workshop is the culinary equivalent of trying to dance the lead in Swan Lake after one ballet lesson. Chances are you’re going to fall on your face.

Even if I didn’t learn any double-secret sushimaking techniques in class, the workshop did teach me one very important lesson: $50 is a small price to pay for a gorgeous plate of sushi made by real chefs who actually know what the hell they’re doing. Get thee to a sushi bar!

WINE WITH SUSHI:
Sacrilege or a Perfect Pairing?

There are people out there who’d say that drinking wine with sushi instead of downing Japanese beer or sake is nothing short of blasphemous. Of course, none of those people is me.

Sure, beer and sake are obvious choices at Japanese restaurants, where wine lists are often notoriously lame or nonexistent. But what to drink when at home? For me, that’s where the wine and sushi combo makes the most sense. I just order myself a mess of sushi from my favorite raw fish emporium and open up a bottle of whatever I’ve got lying around the house.

On such occasions I’ve discovered that wine is actually a better match for sushi than beer or sake. That’s because wine has the power to enhance sushi’s flavor, while beer and sake simply stand back and let the sushi take center stage. Wine’s complexity and inherent compatibility with food take the pairing concept to a higher level.

When choosing the ultimate sushi wine, the old “red wine with red meat, white wine with fish” rule still holds true. Although reds can be wonderful with grilled fish, they tend to overpower the delicate flavor of the raw variety. (If you must have red wine, try something like Beaujolais or a very light pinot noir.)

Crisp, clean wines work better with sushi than rich, intensely flavored wines. If there’s too much going on in your glass, the sushi’s subtle flavor may not be able to compete. Think sauvignon blanc, sparkling wine or a crisp chardonnay from Carneros or Burgundy.

Fear not the gewurztraminer. Wines with a touch of sweetness tend to be excellent with spicy foods like wasabi-smeared sushi. Even if you don’t normally like sweet wines, you’ll be amazed how well they work with sushi.

THE MOMENT OF TRUTH

Sure, pairing tips are nice, but how well do they hold up in the real world with real sushi? To find out, I recruited a couple of like-minded friends to join me in a little sushi and wine pairing experiment at our local sushi hangout.

Following is a summary of our findings, in order of overall preference:

Riesling/gewurztraminer/pinot blanc blend:
Great with the maguro. The sweetness of the wine cut through the spiciness of the wasabi very nicely. For the same reason, it was excellent with the spicy tuna roll. The wine was deemed “a tasty match” for the hamachi, and everyone agreed it was “wonderful” with the California roll and “excellent” with the Kamikaze roll. The only disappointments were the salmon and unagi. This wine was the clear winner!

Fume blanc:
The wine was a little dry for the maguro, but we loved it with the hamachi. One taster was inspired to remark, “Damn it, that was good!” after trying it with the spicy tuna. It was “excellent” with both the Kamikaze roll and unagi, and “good” with the sake and California roll. This one tied for second place, along with the chardonnay.

Chardonnay:
The chard was good with the maguro and hamachi, but disappointing with the salmon. It matched surprisingly well with the spicy tuna roll, and everyone thought it paired well with the California roll and unagi. The wine was also good, “but not amazing,” with the Kamikaze roll.

Rhone white:
This wine was fabulous with the maguro — refreshing and clean. It also did well with the hamachi and spicy tuna, though these pairings were “nothing to write home about.” We all liked it with the salmon, and loved it with the California and Kamikaze rolls. The wine was a bit too dry for the unagi.

Merlot:
This wine was awful with the maguro, but surprisingly good with the hamachi. After sampling it with the spicy tuna, one taster advised, “Don’t ever try this at home!” Similar warnings were issued for the salmon and California roll. It was declared “pretty good” with the Kamikaze roll and “excellent” with the unagi, due to the barbecue sauce. Not surprisingly, this one came in last place.

With the exception of the merlot, I’d heartily recommend any of the above wines as great companions for sushi. But then, for sushi freaks and wine geeks like me, even the bad combinations are still pretty damn good. 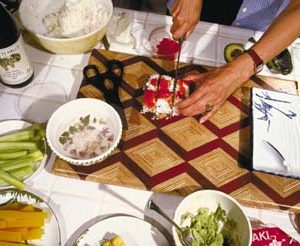 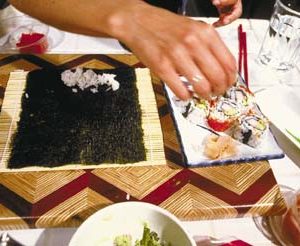