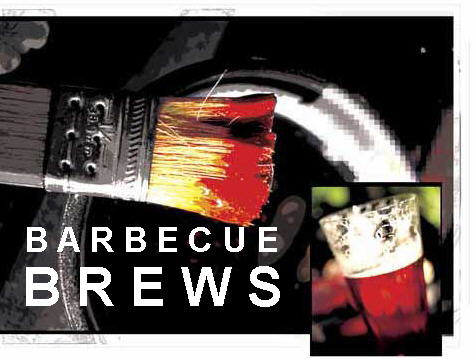 The grill’s hot. The burgers, chicken breasts and vegetable kebabs are sizzling. The chef, spatula in hand, stands at the ready. And on the table sits a glass of beer. Inevitably, there’s beer. Just as fall marks the march of cold-climate dwellers back to their outdoor grills, so is the ritual marked by griller’s hand wrapped around a cold brew. To most veteran barbecue chefs, beer’s a vital component of outdoor cooking. But the funny thing about beer is that all we ever seem to do with it is, well, drink it.

Which is not to say that beer is anything less than the perfect thirst-quencher for a parched chef laboring over hot coals. But the value of beer at the barbecue goes so much further than what can be tasted from the glass. Gastronomically, we’re missing the mark.

With the rising popularity of Belgian cuisine, beer’s considerable talents in the kitchen are finally emerging from the shadows of Bud Light neons. Still, there’s no reason to go searching through foreign cookbooks to find culinary uses for beer. It’s the perfect addition to a wealth of barbecue standards, including barbecue sauces, marinades, salad dressings, condiments and even potato salads. In fact, almost every food we normally associate with a barbecued dinner can be enhanced with the simple addition of the right brew.

Of course, there lies the problem: it has to be the right beer. Add light lager by the bottleful to anything (and everything) and your odds of coming up with a fabulous feast will likely sit somewhere around those of the Florida Marlins making the World Series. Like most matters culinary, barbecuing with beer is a little more complicated than that.

The good news, however, is that it’s not a lot more difficult. By simply following a few basic guidelines, the would-be barbecue brewmaster can be virtually assured that the mustard won’t end up tasting like sour pale ale, and that the barbecue sauce will be rich and flavorful instead of sweet and vapid.

The most important thing to remember when adding beer to sauces and dressings is that the hops — which is to say the ingredient that contributes bitterness to a brew — will tend to act like an acid in food. For this reason, particularly hoppy beers such as pale ales, IPAs, bitters and some pilsners, should be employed very carefully. They work well as substitutes for lemon or vinegar in a barbecue sauce or salad dressing, but only in controlled amounts and usually in concert with another acid.

Malty, sweet beers, on the other hand, contribute tons of body and richness where those qualities are required. In a creamy potato salad, for example, a malty ale such as a Scotch ale or Belgian abbey-style ale will add a degree of robustness and taste, while at the same time harmonizing the flavors of the other ingredients. Similarly, a mustard made with oatmeal stout or brown ale will carry significantly more body than an average yellow mustard, and a more intense color too.

Finally, because barbecued foods have an inherent smokiness to them, it’s handy to remember that very dark beers also tend to have a smoky, roasty quality. This is due to the toasted-to-roasted malts that’re used in brewing such beers. It also happens to make these brews ideal additions to almost anything that’ll be eaten with — or on — food fresh from the grill.