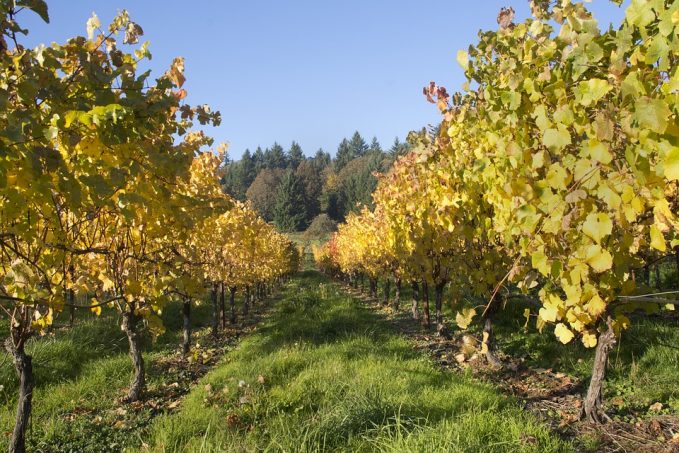 If you appreciate French-style wine, follow the Oregon trail! The Beaver State, on exactly the same 45 degree northern latitude as the famous wine regions of France, is coming up with some wines that dare to look Burgundian and Bordelais winemakers straight in the face.

How did this happen? Experimentation, rapid progress and, you guessed it, ideal appellations.

Here we go for the dry definition: An appellation names and delineates a specific area of land within which grapes for a specific wine are grown. Wine producers must follow clearly defined regulations in order to carry the appellation, as well as the varietal of the fruit, on their label. Generally speaking, all fruit grown within a certain appellation will share a common thread in flavor and aroma because of factors such as soil composition, rainfall, climate and lay of the land. Got it?

When you look at Oregon as a whole, you’ll notice that the state’s west has a gentle marine climate. Combine this with gradual seasonal transitions, a lingering sun in fall, the shelter of the Cascades and the natural watershed of its rivers, and you have a perfect playground for superb wines. Inland, the Columbia river tempers dryness and heat, creating another great place for grape growing.

Oregon has five appellations. It shares two — anchored around the Columbia River — with Washington State. More than 400 vineyards and 120 wineries sprawl out over 7,600 acres, producing well over 1.9 million gallons of wine annually.

In Oregon, for a wine to be labeled as a varietal, it must contain a minimum of 90 percent of that grape (as opposed to the Federally mandated 75 percent). The only exception is cabernet sauvignon, which can be labeled as such with a minimum of 75 percent cabernet juice, as long as it’s blended with a Bordeaux-type grape such as merlot.

To be labeled with a specific appellation, all of the fruit must have been grown within that designated, i.e., Willamette Valley.

Oregon law prohibits the use of regional names, such as Chablis, Burgundy and Champagne, to denote varieties. Elsewhere these words are often abused to indicate a generic type of wine.

Pinot noir, the number one varietal in Oregon, accounts for 38 percent of the state’s vineyard acreage (2,900 acres) and resembles the traditional pinots of France’s Burgundy region. This finicky, hyper-sensitive, seductive grape demands such tremendous winemaker skill that each winery ends up with its own unique product. When buying an Oregon pinot noir, know the appellation, learn about the different producers — sometimes neighbors of each other growing fruit a mere mile apart — and taste the wine.

The cool Willamette is by far the largest and most prominent appellation in Oregon, accounting for 75 percent of the total acreage and wine production.

Up to 60 miles wide and about 50 miles inland, this river valley stretches more than 100 miles from the south, below Eugene, to the Tualatin Valley in the north, touching the Columbia River, northwest of Portland.

The Willamette is often subdivided into the North and South Willamette Valleys, with the border running just below the state’s capital, Salem.

North Willamette Valley has been called the heart of Oregon winegrowing. Eighty-four wineries thrive on its 4,700 acres of volcanic slopes and well-drained soil. Pockets of rust-red iron dioxide in the soil add their own unique flavor.

pinot noir
chardonnay
riesling
pinot gris
pinot blancFact: The Eyrie Vineyards in Dundee were started in 1966 by Oregon pioneer wine grower David Lett. His 1975 pinot noir sent the French wine world into shock when it proved to be equal to the unshakable, dignified and great French Burgundies. Naturally, the French seized an obvious opportunity and started buying land in Oregon, i.e. Domaine Drouhin. You can’t blame the French, or for that matter, other investors, because Oregon’s vibrancy and idealism are highly appealing — vinification, irrigation and planting can be as dense as desired. In France, no such freedom exists.UMPQUA VALLEY

Further south, also 50 to 60 miles inland, the Cascade Mountains join the Oregon Coast Range at the Umpqua watershed, causing chilly nights and warm, dry days. Situated entirely in Douglas County, the appellation stretches 70 miles to the Klamath Mountains. The Valley’s center is the town Roseburg. Umpqua, known for its “hundred valleys,” provides so much moisture in river drainage that despite dry, warm days, irrigation isn’t necessary.

The region contains seven wineries and boasts 518 acres of vineyards that flourish on sandstone and sandy loam soils.

Because irrigation is necessary on these sand and silt soils, distinct flavors and wines are the result. The appellation covers 658 acres of Oregon and hosts four wineries. It stretches from northern Oregon into southern Washington State.

Varietals shift from warm-weather grapes in the east to cool Willamette-type varietals in the west.

The others? You’ll just have to hit that Oregon trail!