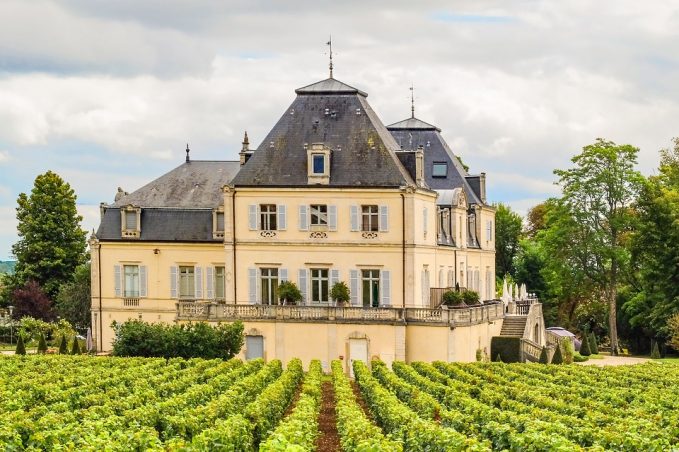 6 Grand Cru Appellation — a vineyard with officially recognized status that only need use the name of the vineyard — Montrachet, Romanee-Conti, Musigny, Corton, etc.

Appellation information supplied by Tim Hanni, M.W.
A closer look at the six main regions.CHABLIS: Chablis produces only white wines. Some of the finest chardonnays in the world come from well over 250 different growers there. There are seven Grand Cru appellation-vineyards: Les Clos, Vaudésir, Valmur, Bougros, Blanchot, Preuses and Grenouilles. All other wines fall under the regional Chablis appellation.

GRAND CRUS AND THE WINES THEY PRODUCE

Below the Côte d’Or lies the Côte Chalonnaise and its five villages, where mostly reds are produced. Montagny, one of the appellations, grows only chardonnay. Just under Chalon lies the Mâconnais. With its chalky soil, Mâconnais chardonnay vines have merited seven appellations. From both regions come far less glamorous — yet far more affordable and remarkably good — wines. (By the way, there’s a village in the Chalonnaise named chardonnay, which gave its name to the grape!)Most interesting Côte Chalonnaise villages and appellations include:
Mercurey
Givry
Rully
Pouilly-Fuissé

Are you ready for Beaujolais and its Gamay vines? Light and uncomplicated, Beaujolais wine comes from 13 appellations, 10 of which are specific villages. Beaujolais is the area rendering the most hype and deception. So much so that the 10 villages refuse to put the name Beaujolais on their labels because they don’t want their products to be confused with those mass-produced by other vintners. These rebellious 10 villages call themselves Crus. The other three appellations are Beaujolais from the southern half, Beaujolais Supérieur with slightly higher alcohol content, and Beaujolais-Villages.

The four most popular Crus are:
Brouilly
Morgon
Moulin-a-Vent
Fleurie

Now, what’s this stuff called Beaujolais Nouveau? Well, it’s wine that’s picked, vinified, bottled and shipped by the third Thursday in November of the same year. Thus, the grin on the farmer’s face is the instant cash flow — money as fast and as good as it gets. Beaujolais Nouveau is probably the best marketing gimmick the wine industry has ever brought on. It’s basically a generic wine, way too young for its own good, packaged with a cool, colorful label.The Label: Okay. How do you know what you’re buying? Reading a Burgundian wine label is an art in itself. It doesn’t help one bit that Burgundy, as a whole, stubbornly clings to labels printed with medieval-looking fonts on yellowed parchment-type paper.

For starters, remember that in France, the name of the wine is derived from the name of the geographic location, which means that 100 percent of the grapes used in making the wine are grown within that area. Thus, a wine labeled Bourgogne simply means the grapes were grown somewhere in Burgundy, whereas a wine labeled La Tâche means the wine is made strictly from pinot noir grown in the appellation Grand Cru vineyard La Tâche in the village of Vosne Romanée in the sub-region of Côte de Nuits, which is part of the Côte d’Or in the Burgundy region. Got it? Don’t worry. Just remember: circles within circles.

Note: Because there are so many wine growers in Burgundy, the role of the producer and merchant, the négociant, is crucial. The négociant buys grapes and often owns several vineyards across the region, including some of the best appellations. The wine label, in addition to the appellation, also mentions the name of the négociant and tells you whether the wine was bottled at the estate.

The summary: Burgundian appellations are the ultimate love affair between grape and land and a somewhat sado-masochistic affair between the wino and the wine. The world’s prime real estate served in parcels so small you wouldn’t ever find them on a map. Worth an experiment or two, especially on an expense account or if someone else is paying!