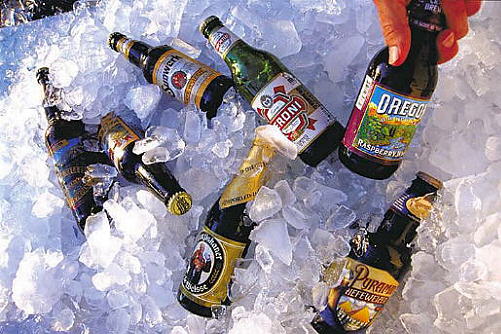 Have you ever wondered what type of beer goes well with oysters? Or if a stout will complement that cut of beef you’ve just taken off the grill? If you have, you’re not alone. Legions of food and beer lovers are finally coming to the realization that beer makes a great addition to the well-planned dinner. The vast potential of pairing beer with fine foods is now under consideration by beer connoisseurs across the country, with pub owners, microbrewers and chefs leading the way.

Although beer has been an American obsession from the time of the pilgrims, it’s long been considered the party animal of alcoholic beverages. Wine has, over the centuries (and as most of us know), been the beverage of choice for accompanying fine food. Beer, on the other hand, has traditionally been considered casual — found in casual situations with casual food. It’s consumed at picnics, barbecues and football games — used to wash down burritos, burgers and pizza — a beverage to quaff rather than savor.

But this appears to be changing. As with wine, craft beers provide an exciting array of choices for food pairing. The American beer renaissance of the last decade has brought hundreds of small breweries onto the scene, and many new, quality beers — full-bodied “craft” beers with incredible variations in style and complexity — are now available across the country. In addition, chefs at newly christened brewpubs nationwide are creating a new and exciting “beer cuisine,” which is still in the process of evolving.

Beer lovers have always known that certain foods cry out to be combined with beer. It has a special affinity to hearty, spicy, powerfully flavored foods, among them Indian and Thai curries, highly spiced Cajun dishes and chili-spiked dishes from Mexico, the Caribbean and the American Southwest.

BEER AND ITS COMPONENTS

Beer is made from four essential ingredients: water, fermentable sugars (traditionally malted barley), hops and yeast. These ingredients are processed and combined according to a recipe. Given the right conditions, yeast will convert (ferment) the malt to alcohol, carbon dioxide and the taste we know as beer. The finished product is then bottled and aged anywhere from a week to three months. (For more detail on the brewing process see “The Brew Page” in Vol 2.1.)

Malt gives beer its overall style, body, color and intensity. The first step for successfully pairing beer and food calls for balancing a beer’s “malty” characteristics with the richness, intensity and overall character of the dish.

A beer’s subtler flavors come from hops (which gives beer a bitter, biting characteristic) and yeast used for fermentation (which can, depending on the brew, impart a varying degree of “bready” or “earthy” flavors). Hops and yeast provide a flavorful overlay to a beer’s malty core and add to the creative possibilities for pairing with food.

We’ve been doing it all along. It’s just that most of us haven’t given it much thought. Those of us who drink beer have probably downed hundreds with hundreds of meals. So, in effect, we’ve all had a head start on the artful pursuit of attaining beer and cuisine nirvana. As with anything, the more you know, and the more you pay attention to what you’re experiencing, the more enjoyment you’ll derive from something as simple as beer and food pairing.

According to Bruce Aidells and Denis Kelly, authors of Real Beer & Good Eats (Alfred Knopf, 1995) there are two principles to keep in mind when pairing food with beer. As with wine, it’s a good idea to match like with like: mild lagers and pale ales with light and subtle dishes; more powerfully flavored amber ales and dark lagers with more aggressively seasoned, intense foods. The idea is to let neither the beer or the food overwhelm the other. What we look for is a kind of synergy, with both the beer and the food tasting better together than either would separately.

The art of matching beer and fine food is still in its infancy. The term “beer snob” has yet to be coined, and the potential to be intimidated or to commit a faux pas by ordering the “wrong” beer has yet to set in. In short — there are no rules, only rules of thumb. Following is a list of food categories and the beers that tend to pair well with them. These are only suggestions and a starting point. Be creative, experiment. Have a food and beer tasting with friends. Most importantly, have fun!

Beer before a meal is definitely a relaxing prelude for what’s to come. Try a Hefeweizen (beer made with malted wheat), of which many styles and brands are on the market today. Some are filtered (properly called “Weizen”) and are leaner in flavor, crying out for a lemon wedge; some are unfiltered, cloudy with some of the residual yeast from fermentation — Pete’s Honey Wheat being an example. Wheat beers flavored with apricot (Pyramid Apricot Ale), raspberry (Spanish Peaks Honey Raspberry) and other fruits are very popular now and serve as light and interesting beginnings to any feast.

Simply prepared shellfish, such as cracked crab or steamed mussels, are complemented nicely by lighter American-style pilsners or crisp, tangy wheat beers. Thomas Kemper White, a Belgian-style wheat, is particularly suited to the simple flavors of fresh shellfish. Depending on the preparation, a move up the scale to a light lager or a pilsner on the scale of Kemper Pilsner or Pilsner Urquell would do fine.

As with shellfish, the simple and clean flavors of wheat beers go well with most kinds of fish. Again, depending on the preparation, there’s room to experiment. A golden ale, such as Pyramid Kalshch, would go very well with firm-fleshed fish. If the seafood recipe happens to be on the spicy side, an ale, such as Anchor Steam, would hold its own.

For a simple green salad, the no-frills style of American wheat beers makes a perfect combination. Unlike wine, whose acidity often works against the vinegar in vinaigrettes, beer blends exceptionally well with the tartest of dressings. For an exciting change of pace, any of the fruit-flavored wheat beers or ales, such as Portland Brewing’s Berrybrew, will complement a summer salad that includes seasonal fruits.

Because pork is a sweeter-tasting meat, the perfect beer combinations tend to be on the sweeter side as well. Amber ales and lagers are very complementary. Try Humboldt Brewery’s Red Nectar Ale or Mendocino Brewing Company’s Red Tail Ale. Seasonal Oktoberfest beers also tend to be made with the pork eater in mind.

Amber beers also tend to be the perfect complement to tomato-based dishes. The sweetness of the malt tends to meld with the tomato flavors and creates a winning flavor combination. Try Pete’s Wicked Ale, Golden Gate Original Ale or any of the numerous amber lagers on the market.

Sweet and smoky are the predominant flavors of any barbecue. Therefore, the best beers for pairing with grilled foods tend to be sweet (malty) and high in hops. California-style amber beers tend to mix beautifully with the most tangy of barbecue sauces. Try Red Hook Extra Special Bitter or Pacific Ridge Pale Ale. These beers tend to be highly hopped and create an interesting play of flavors that mix with the smoke and spice of most barbecue dishes.

There are two ways to approach fire in your food — you can drink to put out the flames, or you can try pairing like with like and attempt a harmonious truce between spice and brew. For insanely hot curries, Cajun dishes or Mexican chili-spiked foods, a light beer, such as a pilsner or wheat, will wash down the inferno and provide subtle undertones of flavor. Lighter Mexican beers, such as Corona, will also serve to extinguish the fire from chili-based dishes. A highly hopped ale, like Sierra Nevada Pale Ale, will provide the cool-down factor and will add an element of hoppy bitterness while creating interesting flavor combinations with the spices. A heavier stout will counterbalance the spiciness in a dish and not only cool the fire but also stand up to the intense flavors and complexity of the food.

There’s a range of choices when it comes to pairing beef, lamb or game with beer. Pale ales, such as Sierra Nevada Pale Ale, tend to blend harmoniously with simple preparations of most red meats. Brown ales, such as Samuel Smith’s Nut Brown Ale, or any other dark ale, provide a winning match for most red-meat dishes. For lamb, with its gamey flavor and combination with aromatic herbs, a highly hopped, dark ale, such as Red Hook Extra Special Bitter Ale, is a sure bet. The character of the hops will create interesting flavor combinations with the spices and herbs used in preparation and marinades. For robust flavors, pour a porter or stout with your steak, lamb or game.

Lagers and ales are sure-fire winners with most poultry dishes. The “like with like” principle comes into play here. Depending on the preparation, chicken is very versatile for pairing with beer. As a tip: the simpler the dish, the lighter and less hopped the brew. For simple roast chicken, choose a mellow golden ale or pilsner that won’t outshine the simplicity of the preparation.

For spicy chicken wings or barbecue, try a highly hopped ale, like Mendocino Brewing’s Blue Heron Pale Ale, to quench your thirst and provide enough bitterness to rise above the sauce. For rich, savory dishes, like chicken in red wine or mushroom sauce, experiment with a slightly darker, sweeter lager, such as Thomas Kemper Bohemian Dunkle, to blend with the savory character of the dish. Turkey, duck or goose, because of their richer flavors, can stand up to richer beers.

Just when you thought you had beer pegged, out come several new products to cause you to do a double take. Dixie’s White Moose White Chocolate Brew, for instance, reminds us that beer evolution is far from over. Many beers on the market can either stand alone as after-dinner beverages — on the same scale as a port or dessert wine — or pair as beverages with desserts. Fruit beers are an obvious example, such as Pyramid Apricot Ale or Belgian Lambic. Serve them either on their own or with tarts, pies or pastries with similar flavors. Chocolate is fast becoming an item to pair with beer. A very dark beer, such as Grant’s Imperial Stout, will be a winner if paired with your favorite chocolate dessert.