Home What We’re Listening To Make Room for Real Ale 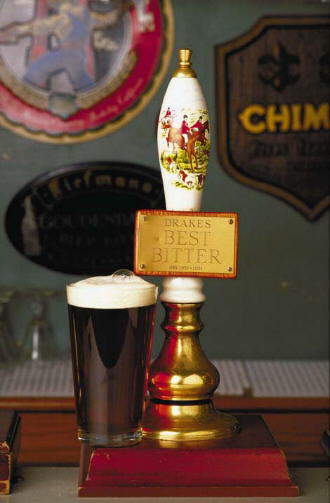 You’re in a bar. The bartender’s talked you into having a pint of ale: it’s dark, a tad hazy, room temperature (not warm but definitely a mile from ice-cold) and flat!

This might not be your idea of a great pub experience, but for thousands of British ale lovers — and a rapidly growing number of North Americans — it’s beer heaven. This stuff is cask-conditioned ale, also known as cask ale or real ale. And if you want to be on the cutting edge of craft-brewed beer these days, you’d better learn to love it.

The good news is that learning to love cask-conditioned ale isn’t that hard. Ale from the cask is beer in its most natural state — fresh from fermentation and poured without the assistance of pressurized carbon dioxide or other gases — so it’s full of flavor, easy to enjoy (without the bloating sometimes experienced by imbibers of beers with higher carbonation) and wonderful on its own or as a complement to a meal. And if you’ve always thought that dark beers are heavy and filling, a good cask-conditioned ale is sure to change your mind within one pint.

More good news: Cask ale isn’t flat. It just looks that way in comparison to the bubbly lagers and ales produced by both big and micro-sized North American breweries. Furthermore, contrary to myth surrounding it, cask-conditioned ale isn’t at its best when served warm, but rather when served at about 53 to 55 degrees Fahrenheit (12 to 13 degrees Celsius). And while a perfectly handled cask of conditioned ale will pour bright and clear, the slight haze that’ll sometimes appear in a pint is perfectly harmless and only impacts the beer’s aesthetics.

So what’s “cask conditioning” all about? In simple terms, it means that after undergoing a primary fermentation and filtration at the brewery, the beer is transferred into a cask. Here more yeast is added to induce a second fermentation. After this process is complete, the beer is fined — often with isinglass (the swimming bladder of a sturgeon fish) — in order to draw the spent yeast cells to the bottom of the vessel. Then, at the bar, the ale is poured from the cask using either gravity or a hand pump (also called a beer engine), which creates a suction of sorts to force the beer out.

The most popular “real” cask-conditioned ale is the British beer known as best bitter. Typically copper-colored, mildly bitter and fruity, this national ale of England is designed for easy drinking. So it should come as no surprise that locating a cask of bitter in a pub in London, Manchester or even the Yorkshire countryside is not so terribly difficult. The challenge, however, comes in finding one that’s been properly stored, tapped and poured.

Cask ale is a “living thing” in the sense that the yeast is still active, so it requires a significant amount of care and attention from the publican (bartender). Basic handling requirements include allowing the cask to complete its fermentation in the pub’s cellar, keeping the cellar clean so the beer doesn’t become infected once tapped, keeping the draught lines sanitary, skillfully managing the pour, and ensuring that the cask is consumed within a short time — preferably no more than two to three days. Failing any of these points can, and all too frequently does, result in off-flavors.

Visitors to London in August can find several hundred cask ales at the Great British Beer Festival, staged by the high-profile beer consumers group the Campaign for Real Ale (CAMRA). If you can’t make this festival, there are dozens of others running throughout the year at various locations around England. Or put together your own mini-fest by staging a pub crawl using CAMRA’s Good Beer Guide book as your map.

In North America, a pair of cask ale festivals in the east offer opportunities to sample dozens of these brews in good form. In Philadelphia, the one-day Real Ale Rendezvous, staged annually in March, typically offers a selection of 12 to 13 casks, including one or two flown in from the UK. The larger Real Ale Festival in Chicago, to be held in the spring of 2000, will feature more than 100 cask ales, including some from across the pond.

Many breweries and brewpubs now offer cask-conditioned versions of their best-known ales. Ask around to see what’s available in your area

The Segregation of Wine
1,176 views